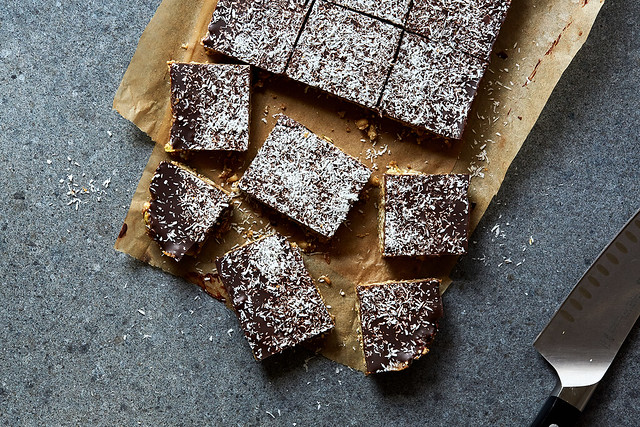 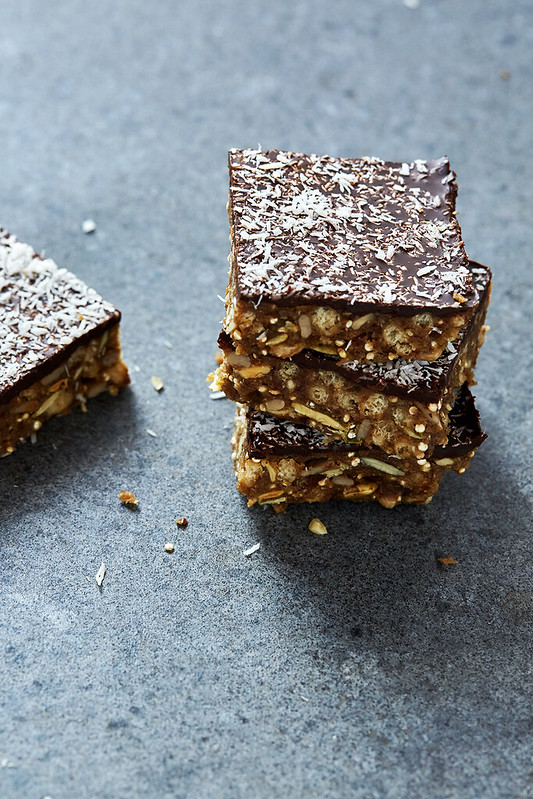 As a self-professed perfectionist/crazy person, this recipe nearly didn’t make it to the website today. In some ways I am actually cringing that it did. I made these bars over the weekend, a recipe I had been dreaming of after being inspired and finally made the time to make them. They are SOOO crazy delicious, you guys. But, after spending the time creating them, after melting the chocolate, carefully sprinkling the coconut and giving the bars time to chill, when it came time to cut the bars, I was doing too many things at once. I was photographing another recipe, I was trying to keep the dog out of the food photo set up on the floor and I let myself get flustered. The sharp chef’s knife came out, I laid the bars on a cutting board and with the first cut I saw that I simply wasn’t present. I was somewhere else. With each cut thereafter it only got worse. Then the sun came out after the first so many photos were taken, so the lighting was changing. Things were just not going my way. 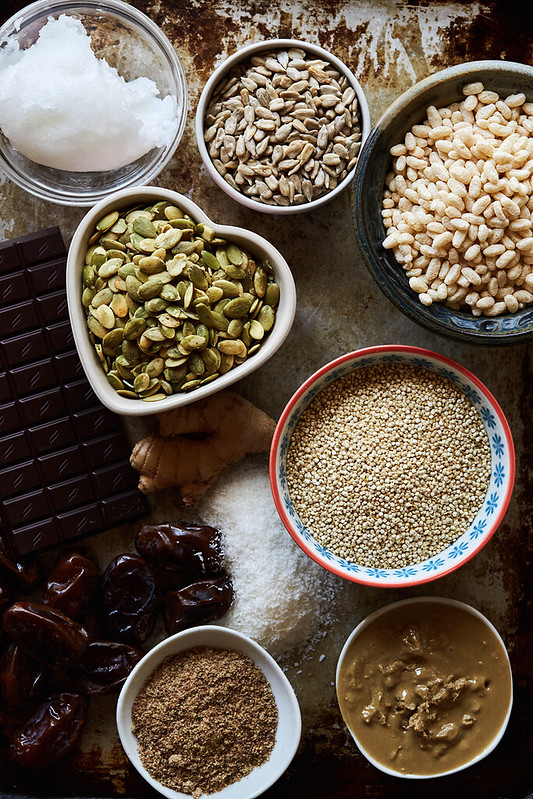 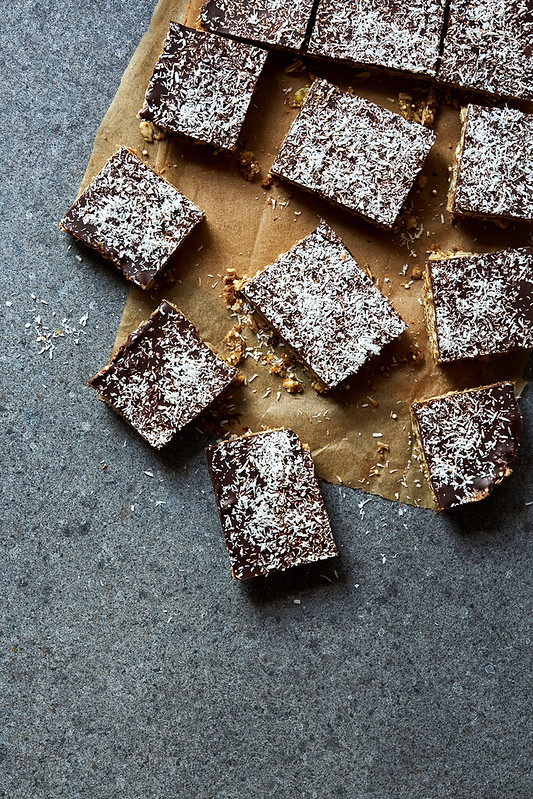 After the bars were all cut and I looked through the lens, I saw it. My totally uneven janky cut job. It was bugging me. It literally looked like a 3 year old did it. Uneven and riddled with imperfections. But I suppose this can be a metaphor for life, am I right?  I shared my dilemma on Snapchat (find me: tastyyummies) and asked my friends what I should do? “Scrap the photoshoot on account of the uneven, janky cuts? OR power through, make it work, because…. real life!” Everyone voted for powering through and making it work. So that we did. 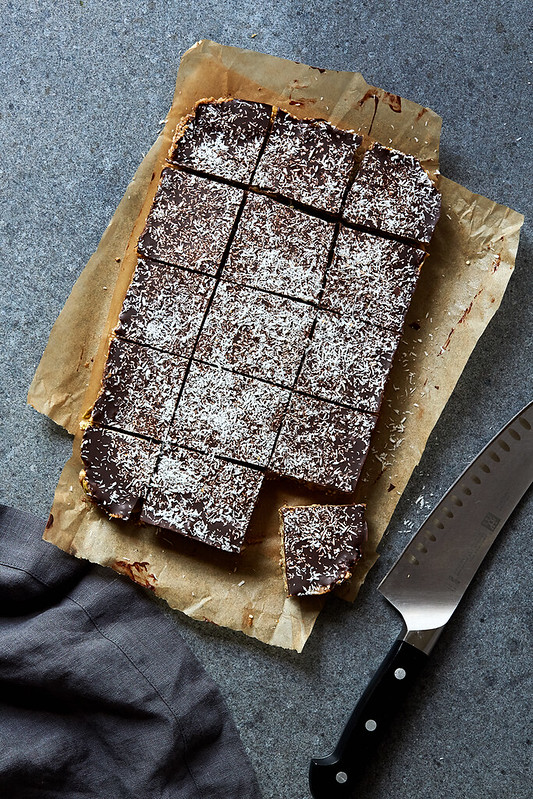 Despite imperfect cuts and photos I feel so so about, these bars are something very special. The perfect crunchy crisp from the puffed rice and the seeds, a little sweetness from the dates with just a hint of a little sea salt (psssst flaked sea salt on top would be so totally bomb), finished off with the creamy rich dark chocolate. Because chocolate is ALWAYS necessary. The ginger and the cinnamon bring a warmth that feels like a hug. These bars on one hand taste like dessert, all while bringing a burst of fuel, they are also the best energy bar of your life. When I decided to make these bars and adapt the recipe, I thought of all the nut-free folks that read this website. So many of you reaching out asking for substitutions in recipes, especially those of you with kids. So many gluten-free/grain-free granolas and granola/energy bars contain nuts – these bars are for you guys.

Oh, also, I wanna give a big shout out to Photoshop for helping me clean up my cut lines, just a little bit, in some of these shots. 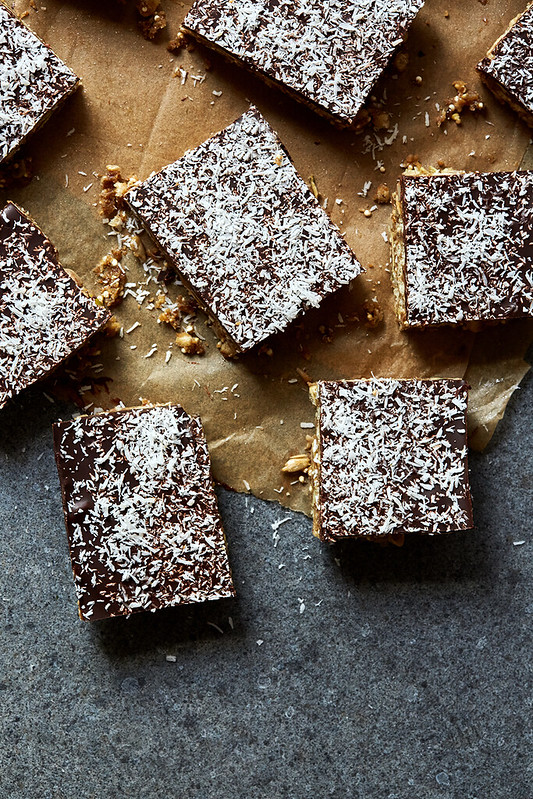 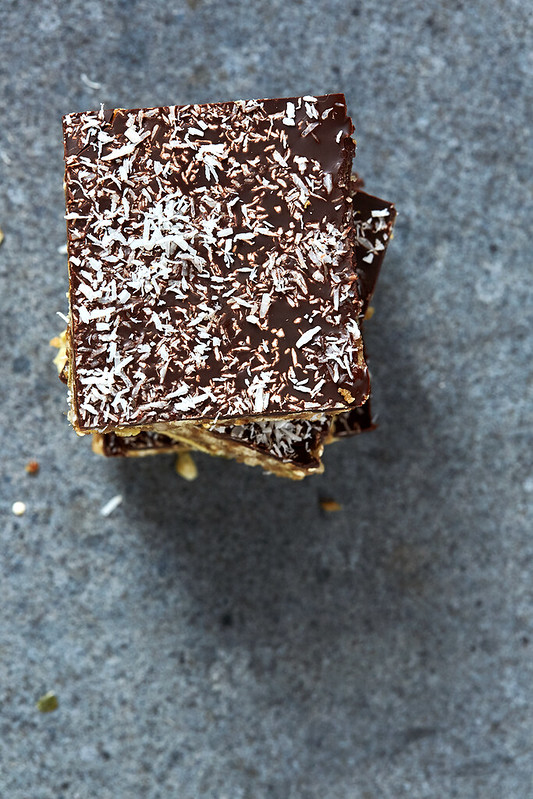 Why sprouted seeds and sprouted puffed rice? Many seeds and grains (nuts and legumes, too) contain natural chemicals that protect them while growing, both from sprouting prematurely and also from predators. These protectors also act as enzyme inhibitors to us, meaning we get much less of the crucial nutrients from these foods than we should be. Plus, this “armor”, of sorts, makes digesting them much more difficult. Sprouting these foods releases these chemicals, helping you to absorb your food’s essential minerals and nutrients.

Germination (sprouting) produces vitamin C and it also changes the grains and seeds in many beneficial ways. It increases it’s vitamin B content, carotene increases significantly, but most importantly sprouting neutralizes phytic acid, a substance present in the bran of all grains. Phytic acid inhibits our ability to properly absorb calcium, magnesium, iron, copper and zinc. These inhibitors can also neutralize our own already existing precious enzymes within our digestive tract. The complex sugars responsible for intestinal gas are also broken down during sprouting and the sprouting also inactivates aflatoxins, potent carcinogens found in grains. Finally, many previous enzymes that actually benefit the digestion process are produced during the sprouting process. You can sprout your own grains, nuts, seeds and beans by following my simple tutorial or if you are lucky enough, you’ll be able to find sprouted versions of your favorite foods at your local natural grocer. (My local Whole Foods has lots of sprouted options) 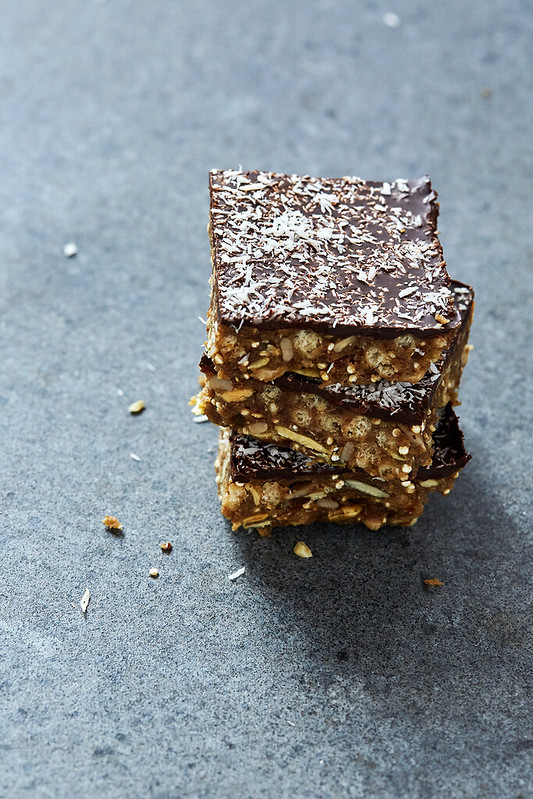 Makes 15-18 bars
adapted from this recipe

Add the coconut oil, pitted dates, sunflower seed butter, freshly grated ginger and cinnamon to the bowl of your food processor. Process around until it all comes together in a thick paste. Add the mixture to a large mixing bowl. Add the puffed rice, pumpkin seeds, quinoa, sunflower seeds and flax seed meal. Add 1/4 teaspoon sea salt (less if your sunflower seed butter is salted).

Line an 8 x 10 inch (or thereabouts, mine is 7.5 x 11) baking dish with parchment paper and scoop the batter into it. Using the palms of your hands to press everything down tightly into an even rectangle in the pan. Put the pan in the fridge or freezer while melting the chocolate on a double boiler (or in small increments in the microwave). Pour the melted chocolate over the bars and use a spatula to evenly spread it.

Sprinkle with the shredded coconut and put back into the fridge / freezer until cold and firm. The bars can be stored in the freezer for months or in the fridge, for up to a week.

You can swap puffed quinoa, millet or amaranth for the puffed rice.

If you can tolerate nuts, almond butter, cashew butter or any other nut butter can be used in place of the sunflower seed butter. 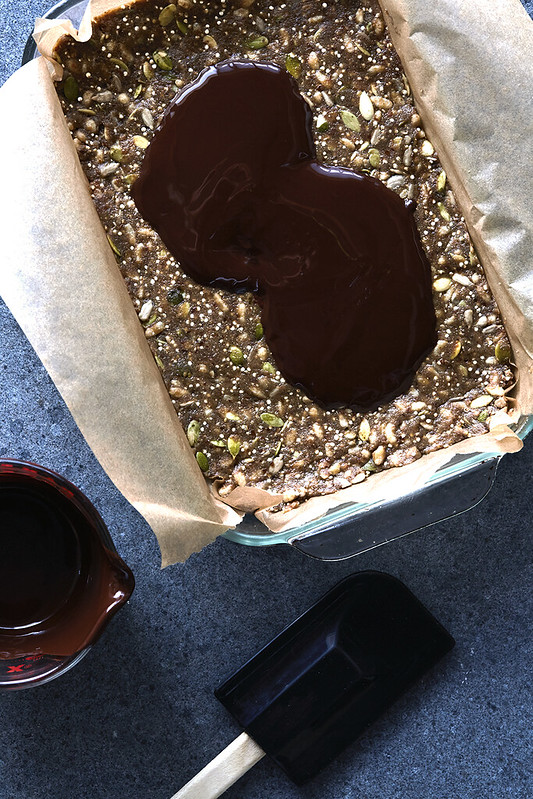 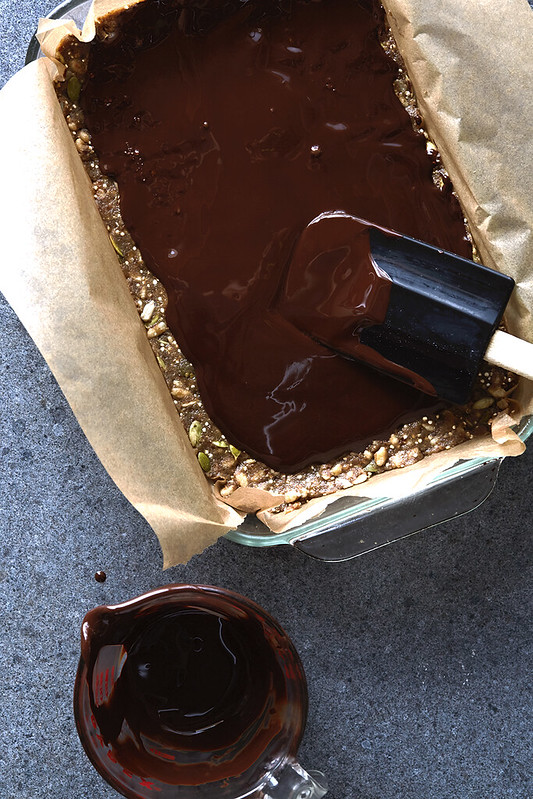 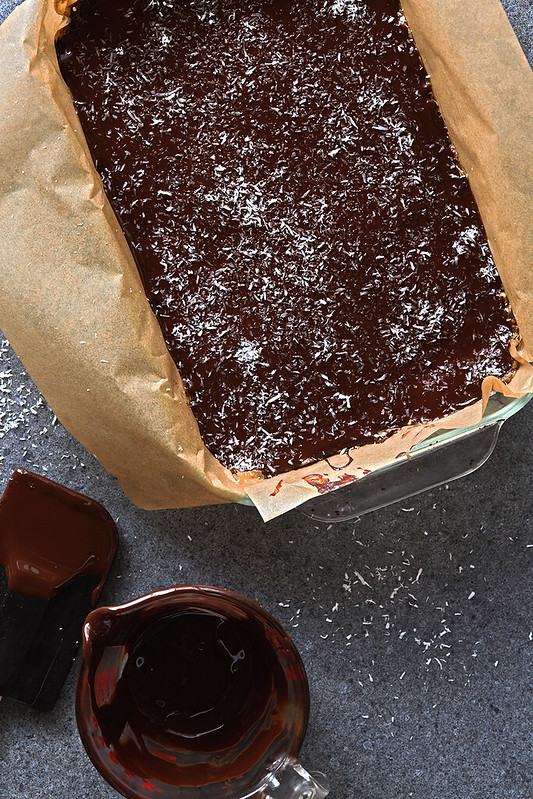