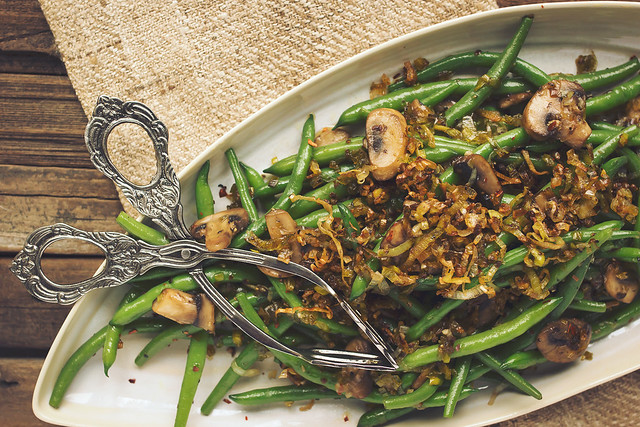 It’s hard to think about much else these days, while visions of a Thanksgiving menu swirl around in my head. This year we have a pretty big “Friendsgiving” planned, could be as many as 10 people for dinner. All of our other California transplant friends are coming to our place and I am making a huge feast. Oh and before you ask, I am working on a follow-up to last year’s 99 Gluten-Free Thanksgiving Recipes, so stay tuned for that and in the meantime, check out last year’s post and keep an eye out for other fun recipes! 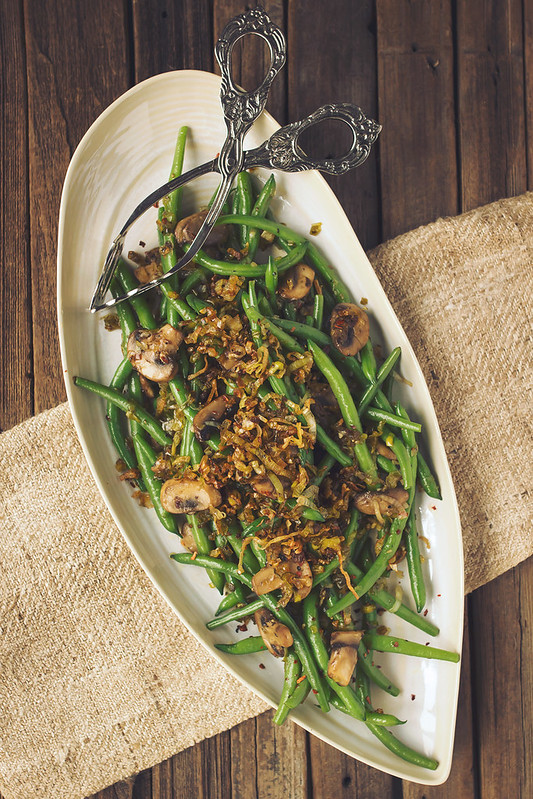 Anyhow, back my Thanksgiving menu obsession. I woke up the other morning, bright and early before the sun, as usual, and I sat up in bed thinking about food (a fairly usual occurrence for me), but not just any food, I was thinking about the Thanksgiving side dishes that I would be serving our guests. 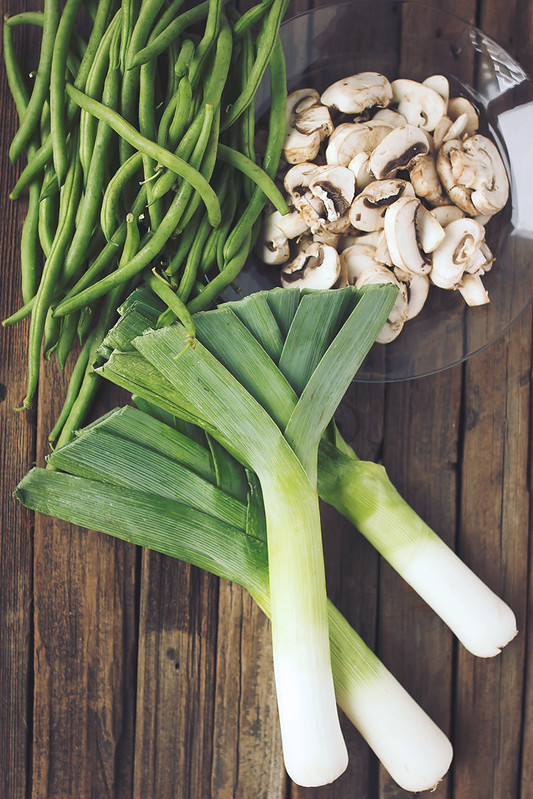 Mark likes the classics, just as they are, while I tend to like to lighten things up a bit, make the classics a bit more modern and ditch all the processed crap. Mark would take the marshmallows and the canned soups, I just can’t do it! So we compromise. When I was lying in bed dreaming of a meal 2.5 weeks away (no big deal, I am obviously insane), I was thinking about how I could make an updated, healthy version of the classic green bean casserole. I happened to have everything I wanted in the fridge, so by 7am, I was creating this dish. Like I said, obviously insane. 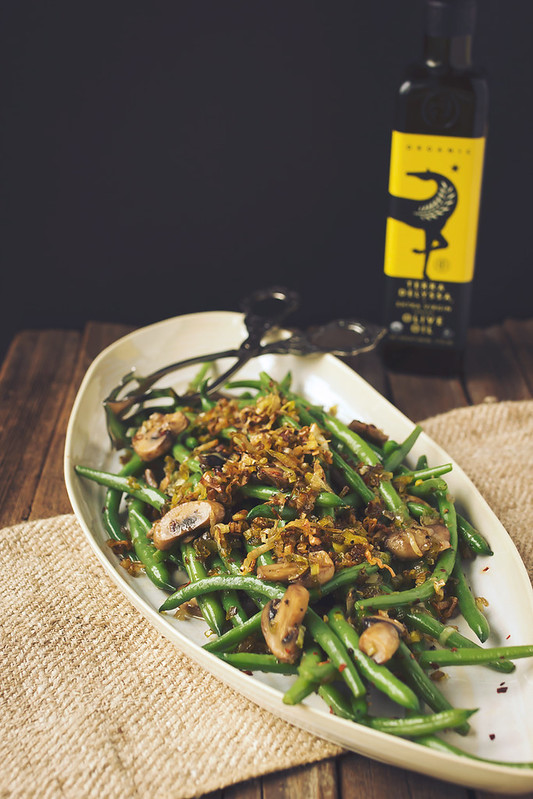 These Sautéed Green Beans with Mushrooms and Caramelized Leeks have a few steps, but you have to trust me when I tell you they are more than worth it. Plus, you can easily prep the beans and the various pieces ahead of time and just sauté it all together just before serving, getting the leeks for topping crispy then, too. The green beans have the right amount of crunch and the mushrooms are of course, a perfect match. Rather than those creepy canned fried onions (are there even real onions in there?), instead this recipe gets its flavor from caramelized and crispy leeks. Sweet and full of incredible flavor they are the perfect addition. These green beans are so good, you’ll find yourself standing over the platter, sans fork, just grabbing the beans with your hand, eating them one by one till their nearly gone. No? Just me? 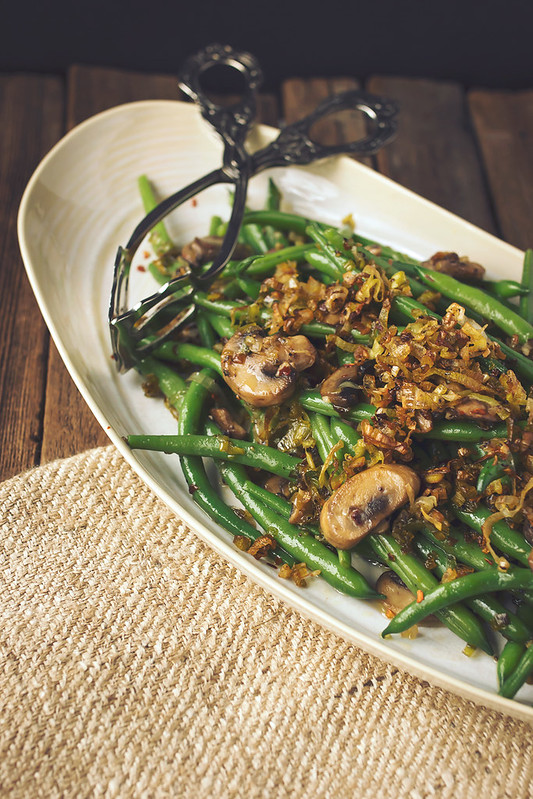 Peel the outer layer from the leeks. Slice off the roots and discard. Slice off the dark green parts of the leeks, discard or save for stock. Slice the white and light green parts of the leeks into 1/8″-inch rounds. Add the sliced leeks to a bowl of water and swirl around. Allow any dirt and sand to settle to the bottom. Scoop out the leeks and empty the bowl. Repeat again with fresh water until no dirt remains.

Heat the butter and/or olive oil in a pan over a medium-low heat. Add the sliced leeks. Stir around to evenly coat. Arrange in a single layer in the pan and cook for 25-45 minutes, stirring every so often. They will brown and become sweeter. You don’t want them to burn, so turn down the heat to low, if necessary.

Meanwhile bring a large pot of salted water to a boil. Add beans and cook until tender-crisp, about 3 minutes. Drain and run under cool running water until they are cold. Set aside.

Heat 1 tablespoon olive oil in a large pan over high heat. Add the sliced mushrooms and cook, stirring occasionally, until they’ve released all their liquid and are browned, about 10 minutes total. Season to taste with salt and pepper.

Add the garlic, green beans and all but 1/4 cup of the caramelized leeks to the pan with the mushrooms. Toss to reheat and combine. Season with salt, pepper and red pepper flakes.

Meanwhile, turn the heat up on the pan with the remaining 1/4 cup of caramelized leeks, moving them around in the pan and allow them to get crispy, this will just take a couple minutes. Add a little drizzle of additional oil if necessary.

Transfer the green beans, mushrooms and caramelized leeks mixture to a serving platter and top with the crispy leeks. Serve immediately.

Notes:
* You can also opt for grass-fed butter or a combination of olive oil and butter

Prep the beans ahead by blanching, rinsing and draining and storing in the fridge. You can also caramelize the leeks ahead of time too. Then, just before serving, cook the mushrooms and add the already cooked green beans and caramelized leeks to warm everything up, get the additional leeks for topping, crispy in another pan [/print_this]

Terra Delyssa is a sponsor of Tasty Yummies. All content, ideas, and words are my own. Thanks for supporting the sponsors that allow me to create new and special content like this for Tasty Yummies.