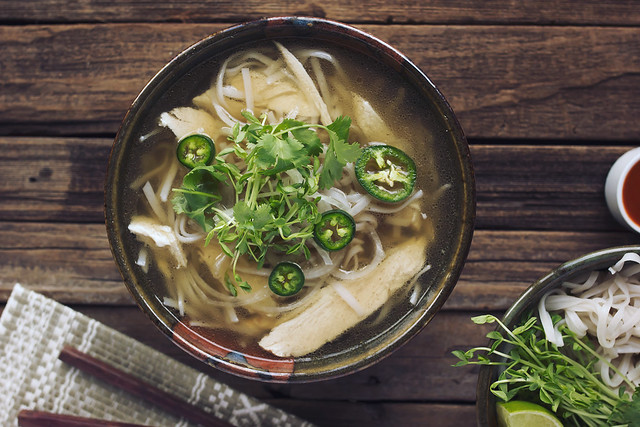 Despite the 80 degree whether we have had this past week, with the onset of November and the clock’s changing back, I start to crave comfort food something crazy this time of year. Soups, stews, crock pot meals, all of it! This homemade Chicken Pho (Vietnamese Noodle Soup) is something I find myself craving very often, this time of year. Even with several authentic vietnamese restaurants in the area, I find my homemade pho has been perfected to where it is the best I can find! (Horn tooted) 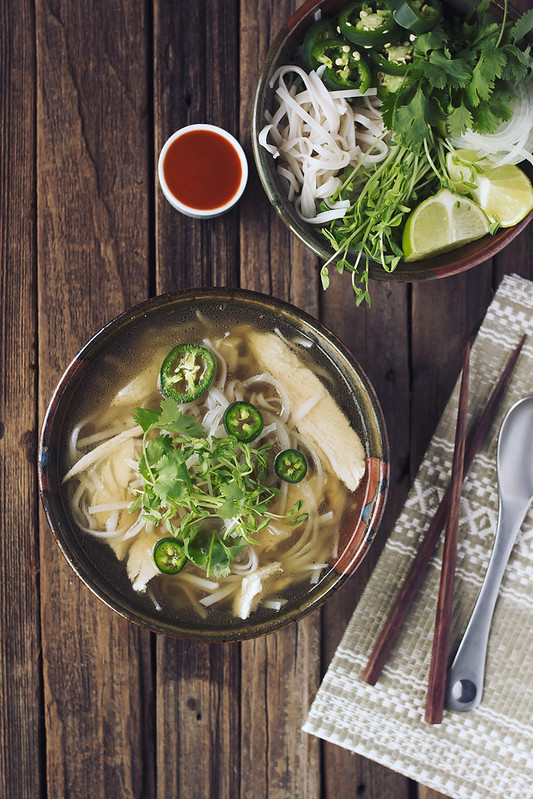 I make a mean Beef pho, which tends to be a bit more traditional, but I also really love making it with chicken, especially when we get one of the beautiful whole pasture-raised chickens from our farmer. Besides being hot and comforting, like any bowl of chicken noodle soup should be, the incredible warming spices in traditional pho not only warms the body, but I truly believe they have some sort of magical powers to warm the soul. To me, this is as close as you’ll ever be to getting a hug from your food. 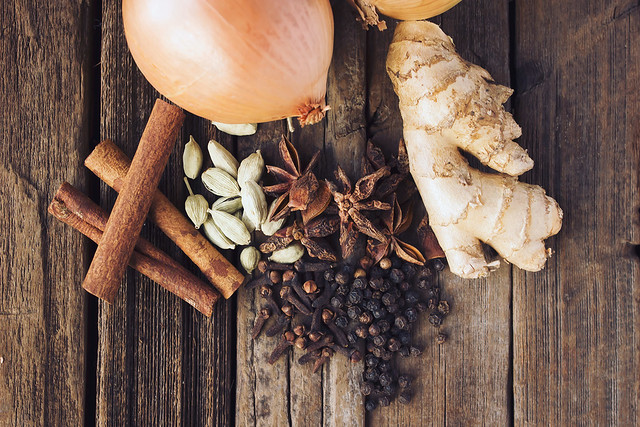 Though it seems like there are many steps to homemade pho, it really is quite easy and once you’ve done the prep work, you can let the soup simmer all day and by the time dinner rolls around, it is done, ready and waiting for you to enjoy it! 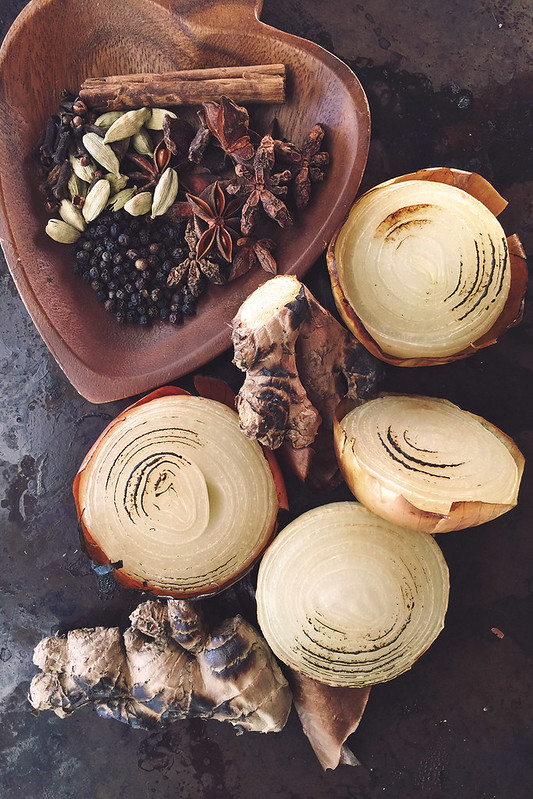 The best thing about a traditional dish like pho are the subtle nuances to the recipe, that bring the most incredible unique flavors. Charring the onions and ginger is just one of them. A simple and quick step that provides a depth of flavor so vital to this dish! Plus, it leaves the kitchen has the most beautifully pungent aroma, too! 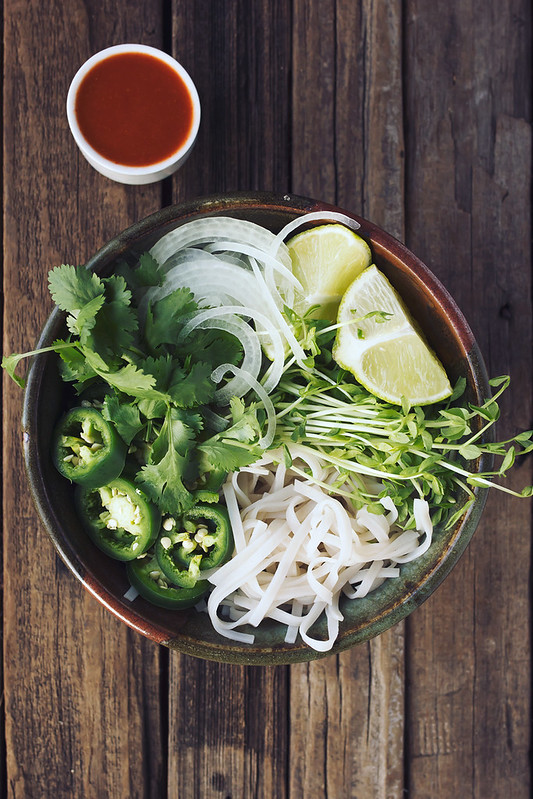 One of the great things about homemade pho are the wonderful add-ins you serve along side it. Besides the incredible spices and flavors in the broth, the fixins’ are what makes this soup so special and so different from most other soups. Traditionally you are served a large bowl of the broth, with all the accoutrements on the side, so you each person customize their bowl of soup to exactly what they’d like. Want it spicier? Add some jalapeños or a little sriracha. Looking for a little tang? A squeeze of fresh lime. Raw onions bring an amazing flavorful crunch as do the fresh sprouts and don’t forget the cilantro and thai basil, if you can get your hands on it. Mark likes his broth with a very small amount of noodles if any at all, I like a bit more in mine. For my paleo and grain-free readers, try zucchini noodles instead of rice noodles. They are a wonderful and simple swap out. 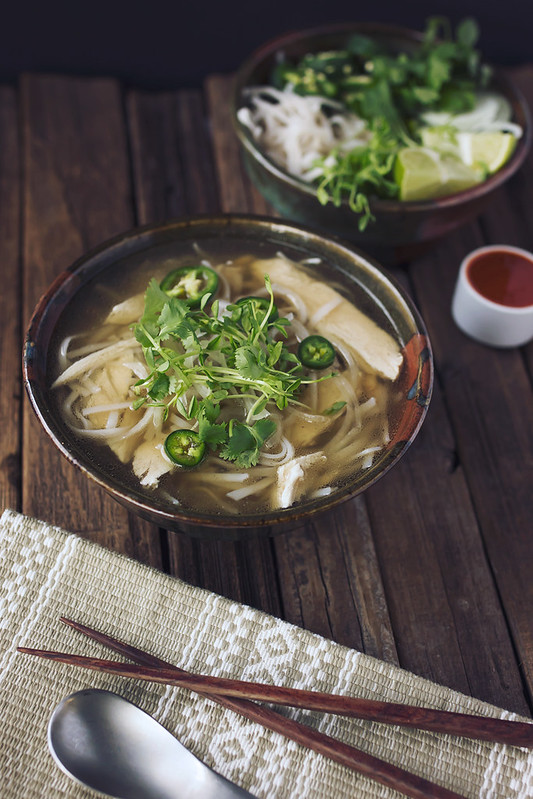 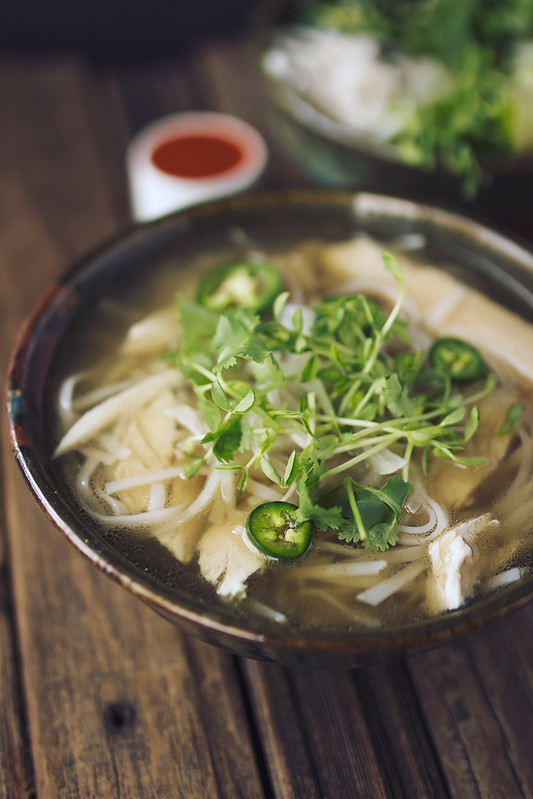 Prepare the pho broth:
Char onion and ginger. Use an open flame on grill or gas stove. Place onions and ginger on cooking grate and let skin burn. (If using stove, turn on exhaust fan and open a window.) After about 15 minutes, they will soften and become sweetly fragrant. Use tongs to occasionally rotate them and to grab and discard any flyaway onion skin. You do not have to blacken entire surface, just enough to slightly cook onion and ginger. You may also instead roast the ginger and onions on a baking sheet in a 400-degree oven for 30 minutes, I have done it both ways and both work great.

Let cool. Under warm water, remove charred onion skin; trim and discard blackened parts of root or stem ends. Halve or quarter the onions. If ginger skin is puckered and blistered, smash ginger with flat side of knife to loosen flesh from skin. Otherwise, use sharp paring knife to remove skin, running ginger under warm water to wash off blackened bits. Set aside. (I’ll be honest, since I roasted the ginger in the oven, and it was far too hot to peel, I just halved the big piece in two and dropped it into the stock, peel and all.)

Parboil the chicken. Place the whole chicken in a stockpot (minimum 8-quart capacity) and cover with cold water. Over high heat, bring to boil. Boil vigorously 2 to 3 minutes to allow impurities to be released. Dump the water into sink and rinse the chicken with warm water. Quickly scrub stockpot to remove any residue. Return the chicken back to pot.

Simmer broth. Add 4 quarts water to pot, bring to boil over high heat, then lower flame to gently simmer. Use ladle to skim any scum that rises to surface. Add all remaining broth ingredients and cook, uncovered, for about 30 minutes. Remove the chicken from the pot and cut off as much meat as you can/want from the bones, run under cool water to stop from cooking, drain, roughly chop, cut or shred and place in the refrigerator, covered. Place the bones and skin back into the pot of broth. Allow broth to continue cooking; in total, the broth should simmer a minimum of 3 hours, I simmer mine for around 6 or more hours, sometimes.

Use ladle to skim as much fat from top of the pho broth as you like, I never do this. (Cool it and refrigerate it overnight to make this task easier; reheat before continuing.) Taste and adjust flavor with additional salt, fish sauce and yellow rock sugar. The pho broth should taste slightly too strong because the noodles and other ingredients are not salted. (If you’ve gone too far, add water to dilute.)

The key is to be organized and have everything ready to go.

Heat the pho broth (if it isn’t already) and ready the noodles. To ensure good timing, reheat broth over medium flame as you’re assembling bowls. Cook the noodles according to the package directions, being sure to slightly undercook them no matter how you prepare them, since they will continue to cook in the hot broth and you don’t want soggy noodles.

If you’re using dried noodles, before blanching cover the noodles with hot tap water and soak 15-20 minutes, until softened and opaque white. Drain in colander. For fresh rice noodles, just untangle and briefly rinse in a colander with cold water.

Blanch noodles. Fill 3-or 4-quart saucepan with water and bring to boil. For each bowl, use long-handle strainer to blanch a portion of noodles. As soon as noodles have collapsed and lost their stiffness (10-20 seconds), pull strainer from water, letting water drain back into saucepan.

Place the noodles into the bowls. Noodles should occupy 1/4 to 1/3 of bowl; the latter is for noodle lovers, while the former is for those who prefer a brothier soup.

Add other ingredients. Place slices of cooked chicken atop noodles. (If your cooked meat is not at room temperature, blanch slices for few seconds in hot water from above.) Garnish with onion and chopped cilantro.

Ladle in broth and serve. Bring broth to rolling boil. Check seasoning. Ladle broth into each bowl, distributing hot liquid evenly to warm the other ingredients. Serve your pho with a garnish plate with your desired add-ons. Enjoy! [/print_this]

Yellow rock sugar (a.k.a. lump sugar) is sold in one-pound boxes at Chinese and Southeast Asian markets. Break up large chunks with hammer. 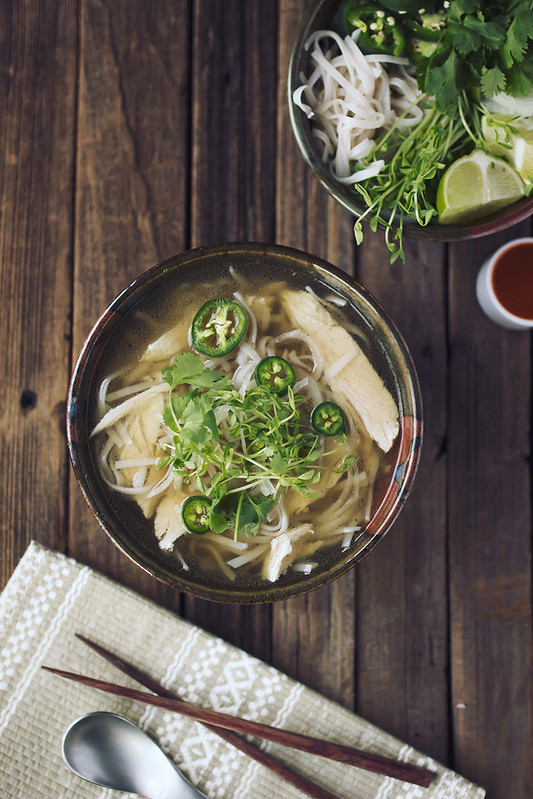