Don’t Fear the Fat // The Basics 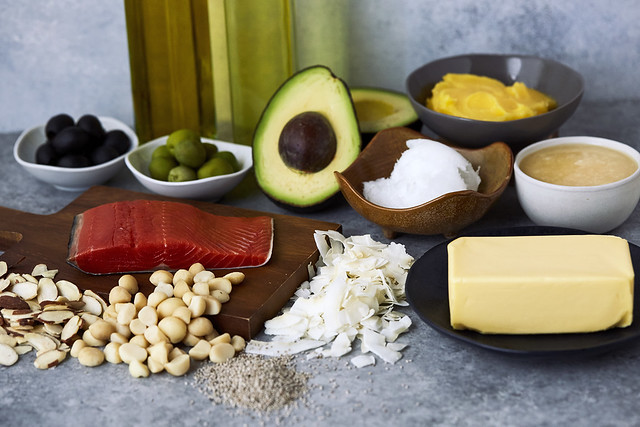 Why Are We Talking About Fat?

The reason I write this post, is that even though, for so many us, we have woke to this knowledge and have worked hard to reframe our approach to nutrition and no longer fearing the fat, we still have so much work to do. After many decades of low-fat propaganda, the “fat makes you fat” rhetoric is still so deeply ingrained in the collective psyche. Many people STILL greatly fear fat, even though study after study shows that fat is not only harmless 1http://ajcn.nutrition.org/content/early/2010/01/13/ajcn.2009.27725.abstract but that it is in fact, quite necessary to many important functions in the body. I myself see this fear weekly in my nutrition clients, all over the internet and in my social feeds, at the grocery store, at restaurants, at the gym, etc and of course, all of the many side effects of low fat eating – we HAVE to change this dialogue!!

It is beyond challenging to decide where to even start on such a huge, huge topic. Chatting about dietary fat is a big undertaking and we are going to merely just scratch the surface with this initial post, decoding the myths and where the fat fearmongering began, along with the crucial reasons we need fat in our diet. So, let’s get to the basics.

First and foremost you need to know that fat is a necessity in our bodies. This vital macronutrient provides building blocks for the brain, hormone and cellular membranes throughout the body, it is essential for the absorption of fat-soluble vitamins like A, D, E and K and it is deeply hydrating!

By adequately increasing my healthy fat intake, more than any other change I have made in my lifestyle and diet, I have personally seen profound affects on my health, from my digestion to my skin including chronic hormonal and cystic acne, from my moods to my ability to concentrate, hormonal imbalances to libido (YUP!). Fat is a powerful anti-aging food, both internally and externally. Consumed as part of a healthful diet, fatty acids (the building blocks of fat) help stabilize blood sugar – allowing your body to release fat, protect it’s lean muscle, and surge with energy. When our focus is on creating meals that are rich not only in healthy fats, but also quality well-sourced proteins and fibrous green leafy veggies, we can thank especially the healthy fats for keeping us satiated. Staying satisfied for longer means so you won’t find yourself searching for the junky, processed snacks in between these healthy, whole food meals. 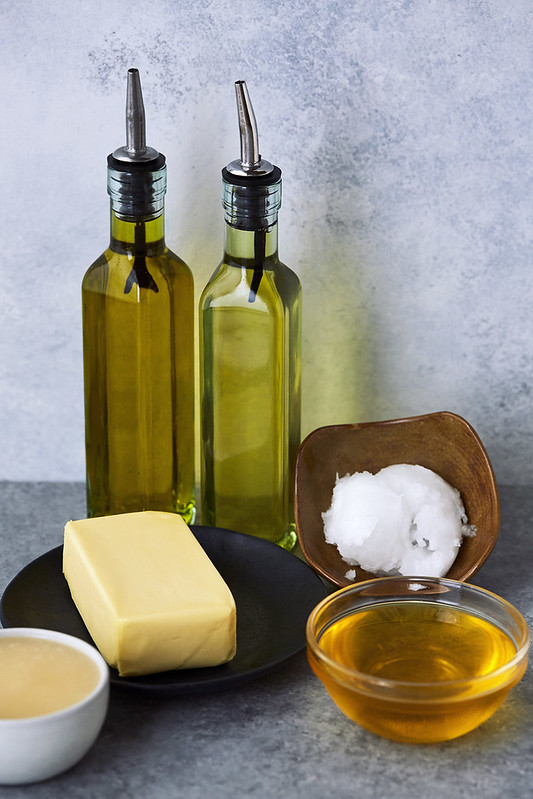 Where Did the Fear of Fat Originate?

For many of us, the demonization of fat has long been part of our lives. Many of us grew up in a time where low-fat, low-calorie diets were the supposed answer to health and weight loss. But where, when and how did this brainwashing actually begin?

We’ve all heard it, a lot. ‘Fat in our food equals fat on our body.’ ‘Clogged arteries are the results of eating too much saturated fat.’ ‘Eat less, move more.’ ‘Don’t worry, it’s low calorie’ But it may surprise you to learn that this “story” is actually completely, incorrect. It’s just NOT TRUE. It’s based on flawed research and science that completely ignores all of the evidence actually proving the contrary.

Our supposed well-meaning government, health care agencies and the food industry suggested we limit our dietary fat and in the early 90’s even went so far as to create the Food Guide Pyramid that placed at the base, carbohydrates. Yes, pasta, breads, grains, cereals – six to eleven servings daily, to be exact. At the very tip top of that pyramid, in a tiny little triangle, fats and oils along with the appropriately placed sugar – to be “used sparingly”. The food industry promptly responded and the era of low-fat, low-calorie foods were born. Low-fat salad dressings and cookies, fat-free yogurt and more. What’s worse, food manufacturers poured in the sugar and artificial sweeteners to make up for the bland, taste-lacking “frankenfoods” they created.

To rewind even further, in the 1950s, a prominent Minnesota physiologist named Ancel Keys began making claims that fat, particularly of the saturated variety along with dietary cholesterol, posed the biggest risks for heart disease. While to most, his research looked fairly convincing at the time, it was his (flawed) theories that originally launched the beginning of a powerful fat-fearing era in nutrition. Keys, the father of the “Diet-Heart Hypothesis” wasn’t a cardiologist or and M.D. of any kind, he studied eels in the 1930’s earning him two Ph.Ds (one for oceanography and biology and the second fish physiology). As well he was the creator of K-Rations, a non-perishable, ready-to-eat meal that could fit in a soldier’s pocket as a short-duration, individual ration. Oh and each daily ration of meals also contained a dozen commercial-grade cigarettes! Yummm.

Before long, the American Heart Association, who received large amounts of cash donations from the vegetable oil industry, jumped on this fat-shaming bandwagon that Keys created upon flawed research (because clearly they would benefit greatly from this story being told).  Up until this point Americans enjoyed traditional foods like butter, eggs, and bacon without worrying about their health. But, with these new suggestions, real foods were increasingly replaced by processed, and the era of obesity and chronic disease soon began.

Oh and here is little something that I find to be even scarier than an eel researcher deciding the fate of nutrition for decades to come – there are massive amounts of evidence pointing to the fact that top sugar industry executives have been paying scientists to shift the blame for obesity and chronic disease from sugar to fat since the 1960s. 2http://jamanetwork.com/journals/jamainternalmedicine/article-abstract/2548255 3https://www.nytimes.com/2016/09/13/well/eat/how-the-sugar-industry-shifted-blame-to-fat.html

Ancel Keys started a study called “The Seven Countries Study” which examined the association between diet and cardiovascular disease in different countries.

The study revealed that the countries where fat consumption was the highest had the most heart disease, supporting the idea that dietary fat caused heart disease.

The problem is that he intentionally left out:

Basically, he ONLY included data from the countries that supported his theory, a process known as cherry picking.

It was this flawed observational study along with his lab research that gained massive media attention and had a major influence on the dietary guidelines of the next few decades.4https://authoritynutrition.com/modern-nutrition-policy-lies-bad-science/ The Seven Countries Study is just one of the many extreme examples of “Selection Bias” that are part of the diet-heart hypothesis theories that have become the dietary dogma that so many still continue to live by.

I won’t go too in depth in Keys’ research, you can easily do your own research and Googling on that front, but if there is one major takeaway let it be this – Keys based his claims that saturated fat increases blood cholesterol on lab experiments that he’d done. However, the experiments were not performed using real foods rich in saturated fat (butter, coconut, quality animal fats). Rather his experiments used saturated fats found in artificially created, overly refined, vegetable oils using a process called hydrogenation.

Hydrogenated vegetable oils not only contain saturated fat but also trans fat and a whole host of other unnatural molecules. Trans fat does in fact raise blood cholesterol, as well as lead to heart attacks and strokes. Since then it has been banned in many places, the FDA also enacted a requirement that trans fat content be labeled on packages and in 2015 the FDA ruled that trans fat is not “generally recognized as safe” for use in human food and gave food manufacturers three years to remove the partially hydrogenated oils, or PHOs, from their products.

Ancel Keys was always careful to note in his published papers that his study could only demonstrate association and that “causal relationships are not claimed”. This massive flawed research can all be broken down quite simply. Much of the research Ancel Keys did and based most of his “diet-heart hypothesis” on can be likened to feeding rats strychnine-laced milk and then claiming the milk is what killed them. (An incredible analogy made by Catherine Shanahan, M.D. in her incredible book Deep Nutrition).

But the public never got this story (we *still* have to dig somewhat deep to find this information), instead the public got the story that we should fear fat and ultimately saturated fat, especially animal fat took the blame. 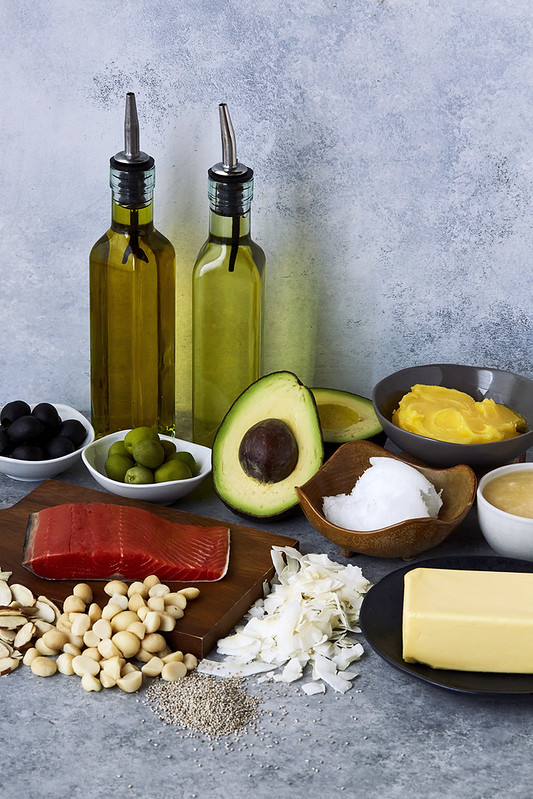 Fat is Necessary for:

Even More Reasons to Include Healthy Fat in your Diet:

Quality Fats and Oils to Include in a Healthy, Nutrient-Dense, Whole Foods Focused Diet:

Read 4 reasons to Avoid Vegetable Oil to learn more about why these oils, in addition to sugar and highly refined carbohydrates, are the real villains when it comes to chronic inflammation, obesity, heart disease, metabolic syndromes and more.

In future posts we will discuss the cholesterol myths, the affects that blood sugar and elevated insulin, along with insulin resistance have on our weight and our health and more!

If you are transitioning from a diet high in refined carbohydrates and sugar and you currently, on the daily, ride a bumpy roller coaster ride with your blood sugar, it should be noted that it can take some time as you transition to reducing your refined carbs and sugar and increase your fat. You are literally re-training your body how to use fats and proteins as your main source of fuel vs. the carbs it has always used. It can get a little worse before it gets better. Don’t give up. Give it a few weeks and you will suddenly start to feel like a new person, with a clearer mind and more energy than ever!

I will leave you with this….

Sugar is the Real Villain

We all now know that sugars and refined carbohydrates are the real cause of obesity and heart disease, not fats. So we can clearly see why the sugar industry execs paid big money for this flawed research to be made the gospel and for their truths to be strategically overlooked and buried. Sugars and carbs turn on a metabolic switch, they cause the release of the hormone insulin and this is what leads to fat storage. We will talk more in depth about blood sugar in detail in an upcoming post.

Here are just a few of my personal favorite books that cover this topic in greater detail, along with many other important facts about nutrition, obesity and more.

The Big Fat Surprise: Why Butter, Meat and Cheese Belong in a Healthy Diet by Nina Teicholz

Eat Fat, Get Thin: Why the Fat We Eat Is the Key to Sustained Weight Loss and Vibrant Health by Mark Hyman, MD

The Obesity Code: Unlocking the Secrets of Weight Loss by Dr. Jason Fung

The Keto Diet: The Complete Guide to a High-Fat Diet, with More Than 125 Delectable Recipes and 5 Meal Plans to Shed Weight, Heal Your Body, and Regain Confidence by Leanne Vogel