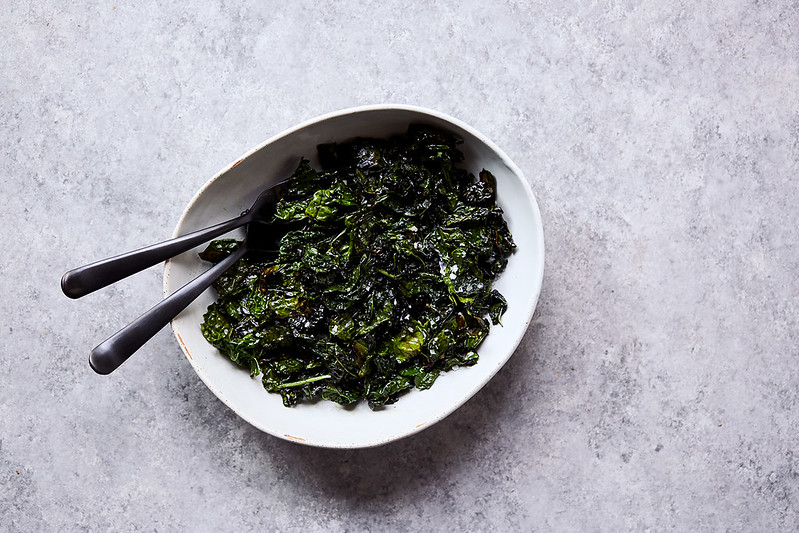 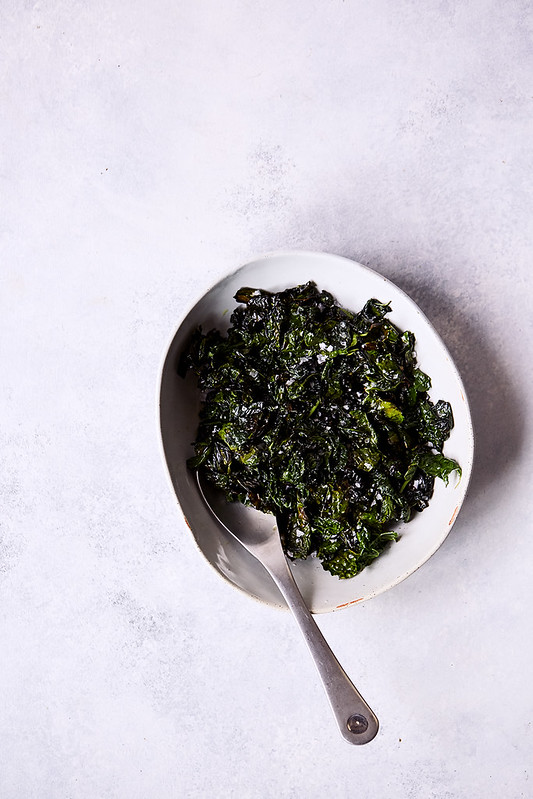 I am all about the simple, easy, weeknight dishes but I especially love nutrient-dense, brain-boosting foods that are easy to prepare and include in the weekly repertoire.

One of the world’s most nutrient dense foods, kale is an inexpensive way to load up on important vitamins, minerals and other nutrients.  Kale is incredibly rich in Vitamin C (more than 4.5 times what you can find in spinach and 1 cup of raw kale has more vitamins C than a whole orange). Kale is also one of the world’s best sources of Vitamin K, with 1 cup of raw kale containing more than 7 times the recommended daily amount, Vitamin K is an important nutrient involved in blood clotting.

Kale is also a great source of B6 and other B Vitamins. Kale like other leafy greens is a rich source of antioxidants, specifically Beta-Cerotene, an antioxidant the body can turn into Vitamin A, along with various polyphenols and flavonoids, including two flavonoids, quercetin and kaempferol known for being heart protective, anti-inflammatory, anti-viral and so much more. Kale actually contains over 45 different flavonoids! WOAH!

Lutein and zeaxanthin, catenoid antioxidants these are the nutrients that give kale its deep, dark green coloring and they are  protective against macular degeneration and cataracts.  Kale is also high in many minerals people are often deficient in, some of the minerals found in kale include calcium, magnesium, manganese, potassium, phosphorus, zinc, copper, iron, to name a few.

Finally, kale is rich source of chemical called sulforaphane. Sulforaphane is a sulfur-rich chemical that activates a gene pathway called Nrf2, and when this pathway is turned on by consuming sulforaphane rich foods, several important health-promoting mechanisms are accentuated. These include powerful anti-aging effects, a reduction in inflammation, enhanced antioxidant protection, and powerful amplification of our ability to detoxify potential damaging chemicals. It should be noted, that sulforaphane is most effective when the vegetables are left raw, cooking can destroy the sulforaphane. But it’s such a super cool chemical we get from many cruciferous vegetables (it’s insanely abundant in broccoli sprouts), that I wanted to share.

The thing is, I know we like to make fun of food for being a wildly popular superfood that all the crunchy nutrition-focused folks have adopted, but it deserves all of it’s praise. It truly is a super food and I don’t know about you, rather than pureeing it into some smoothie, I would much prefer to taste it, especially coated in a little olive oil, some flaked sea salt and with a nice crispy crunch. 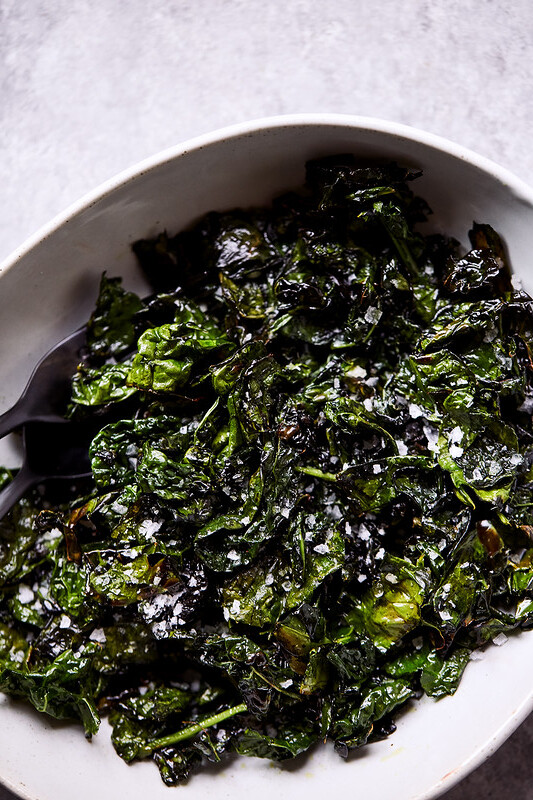 If you ask me, there is no great way to enjoy kale than with this Cast Iron Skillet Crispy Kale. We’ve all had the crispy, crunchy baked kale chips, but they take a bit of time and sometimes they just refuse to get crispy. Plus, I personally love the delicious, delicate taste of the olive oil paired with the crispy kale. And the bonus, the fat helps our body to better absorb and assimilate all of the many nutrients contained within the kale.

Plus with this Cast Iron Skillet Crispy Kale, you can have fun with flavors, try a little Everything Bagel spice blend, some lemon juice and red pepper flakes, maybe just a little garlic or some coconut aminos and sesame oil, lots of variations. Also try a little bacon fat instead of olive oil BOOM game changer. 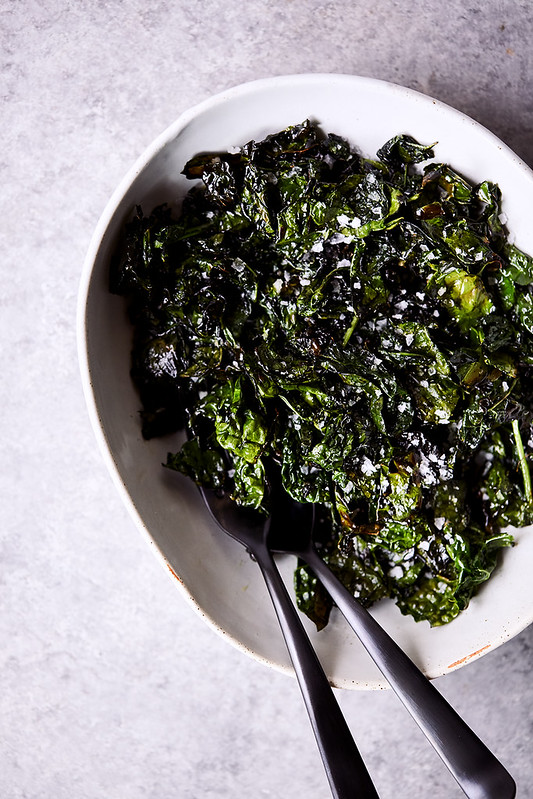 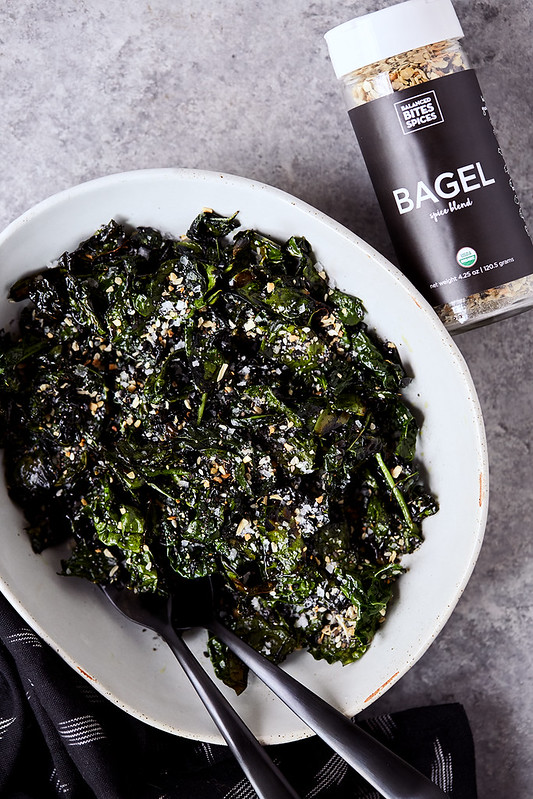