The Starbucks Pumpkin Cream Cold Brew is made with their signature cold brew coffee, vanilla syrup, a sweetened pumpkin cream cold foam on top that actually contains real pumpkin and it is finished with a sprinkle of pumpkin spice topping but it also has a lot of sugar, some not so great ingredients and of course, dairy. This copycat recipe was recreated at home to ditch all the refined sweeteners and sugar and to use the quality ingredients I personally prefer. I am sharing options for dairy and non-dairy and lots of opportunity for you to customize to your preference, follow the instructions for paleo, keto, etc. 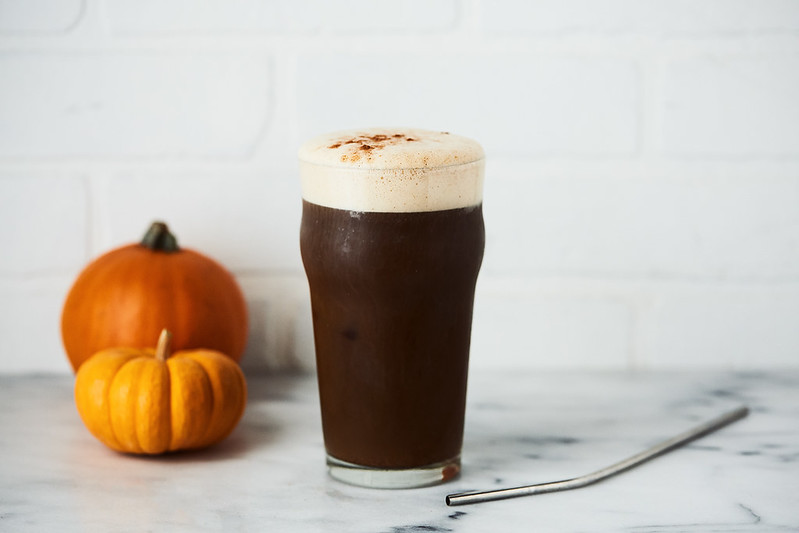 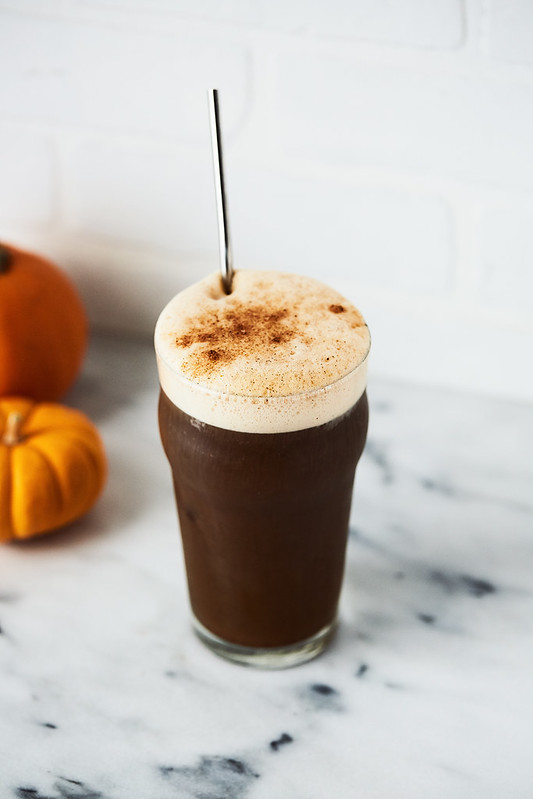 I am married to a Starbucks addict. Mark likes Starbucks. A lot. Me, not so much. Mark loves their straight up cold brew, extra ice, splash of whole milk. He’s simple but he knows what he likes. He also like knowing what he will get, Starbucks are everywhere and he knows what to expect. He will occasionally venture out and try something seasonal that isn’t too obscene and he hasn’t stopped raving about the Pumpkin Cream Cold Brew. Recently he basically FORCED me to try the Starbucks Pumpkin Cream Cold Brew, a persistent little dude – because I think deep down he knew that my fall-obsessed, pumpkin spice lovin’, recipe recreating soul would fall in love and recreate it at home – which he really benefits from!!

And I loved it and I couldn’t do much more than take a sip because it was grossly over-sweetened, even with me asking for only one pump of vanilla syrup in the coffee. But, I considered it market research and off I went trying to figure out how I could recreate it at home.

How to Make a Pumpkin Cream Cold Brew Coffee: 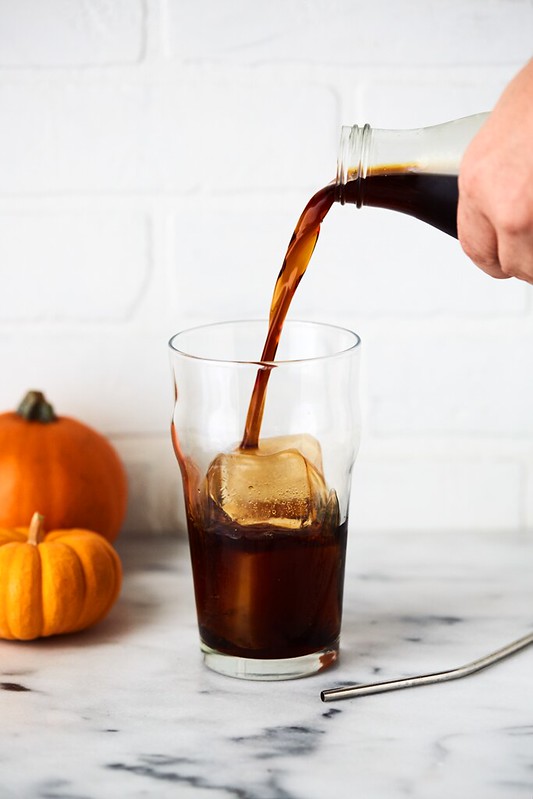 1) Make Your Own Cold Brew or Buy Your Favorite Cold Brew:

Making your own cold brew at home is surprisingly simple and very cost effective. We do this often and the best part is being able to control the strength of my cold brew, the quality of the beans (I always go for organic as coffee beans are one of the most highly pesticide-sprayed foods) and often if I am avoiding or limiting caffeine I will make my own decaf or half caff cold brew, something you can’t find anywhere else. 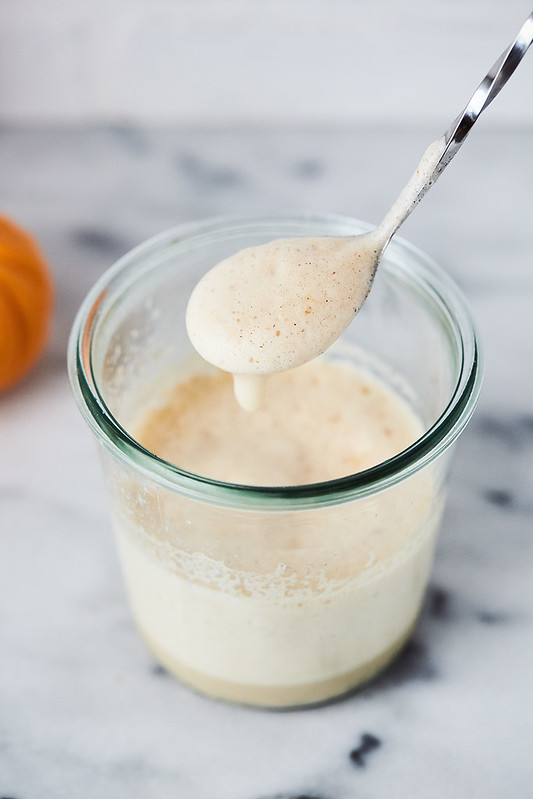 Closest to the Starbucks Original Pumpkin Cream Cold Brew – only if you tolerate dairy:

After some investigating and lots of testing, I learned that Starbucks uses skim milk to get their light frothy cream. In the pumpkin cream cold froth it actually contains a condensed skim milk. I wasn’t going there since those are always high in sugar. But I also read in the ingredients on their website it also contains cream and milk. Just for the heck of it, I also tried frothing half and half and it definitely didn’t foam up and get nearly as frothy. From what I understand the protein without the fat content found in skim or low fat milks creates large air bubbles which allows it stay light and foamy. Now in most other scenarios I would say GO WITH FAT, skim milk is kinda blech yucky face, in my opinion, the fat is where the goodness and taste is and skim milk is generally so crazy stripped of any potential nutrients, but look, if you are looking for a really close replica at home and you tolerate dairy, skim milk is the answer. Again this homemade version of the cold cream foam made without the carageeenan (a stabilizer) and all the sugar that you will find in the Starbucks version, means this DIY rendition is a bit lighter – but it’s really quite nice. If you want a thicker, richer cream try half and half or heavy cream, but just know that it definitely doesn’t get as frothy.

The best results that I found, to recreate the frothy cream, without dairy, is to FIRST select your favorite non-dairy milk. I have tried store-bought macadamia, almond, cashew and coconut milk. They all frothed up a little bit on their own, but not nearly like the skim milk did. Homemade unstrained cashew milk froths up quite wonderfully. The store-bought barista blends that usually have gums and many have sugar these frothed better than the non-barista blends. Coconut milk was least frothy, I think it’s a bit too heavy.

SECOND, ok so here is what I did next my secret for the ultimate frothy, non-dairy milk: stay with me on this one, ADD EGG WHITE!! Hear me out, think of those old school frothy cocktails, a whiskey sour, gin fizz or a pisco sour, they are light, frothy and have that distinct mouth feel that I realized is kinda close-ish to the Starbucks Cold Cream Foams, this is the best way I have found to create a non-dairy copycat. I use approximately 1/2 of 1 egg white and add it to the 1/4 cup on non-dairy milk and VOILA – frothy, non-dairy cold cream foam. I recommend going with less pumpkin on the non-dairy versions, 1/2 teaspoon.

If you can’t do dairy and you can’t consume egg whites or you prefer not to, you can certainly froth up your favorite non-dairy milk, but as I said, it isn’t quite the same, you definitely don’t get those exact foam vibes but it’s still VERY delicious. Try homemade unstrained cashew milk to get the creaminess or for a richer version coconut milk is nice for taste and thickness, but again it’s not as frothy. I recommend going with less pumpkin on the non-dairy versions, 1/2 teaspoon. 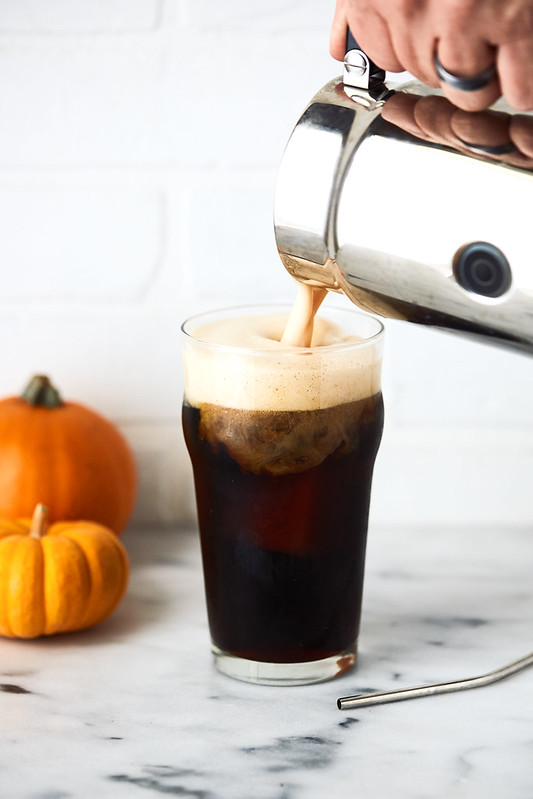 In the Starbucks Original Pumpkin Cream Cold Brew the Grande size has 2 pumps of vanilla syrup in the coffee alone (which you can easily ask for them to leave out), but there is also a fair amount of additional sugar in the vanilla syrup found in the flavoring that gives the pumpkin cream foam topping all of it’s taste, which as far as I understand is mixed in with the pumpkin flavor already, so you can’t leave it out. In a Grande, which is 16 oz the drink as it comes contains 32 grams of sugar.

For me, I really love the way just a little smidge of maple syrup tastes in the homemade pumpkin cream cold foam. 1/4 – 1/2 teaspoon is honestly more than enough for my low-key sweet taste buds. At just over 1 gram of sugar for 1/4 teaspoon of maple syrup or 2.5 grams of sugar for 1/2 teaspoon, this keeps this drink low carb and keto-friendly, easily. You can certainly add more to your liking, maybe upwards or a teaspoon or two, but be aware as you start to add more maple syrup, it may affect the frothiness and it will obviously increase the amount of sugar.

If you are more a straight-up sugar kinda guy/gal than I would recommend making a simple syrup (I would recommend doing so with unrefined sugar or even coconut sugar) vs. adding granulated sugar as that too would affect the cold cream. You can also opt for a few drops of stevia or another non-caloric sweetener, if that’s your scene. I did make one version with this pumpkin spice sugar-free stevia syrup that I happened to have here since it was sent to me as a sample. It was delicious, though I generally do not recommend these type of highly refined products. I would personally rather opt for real food.

I personally prefer to leave the sweetener out of the coffee itself, but if you wanted it sweet, again a little maple syrup would be a nice option. 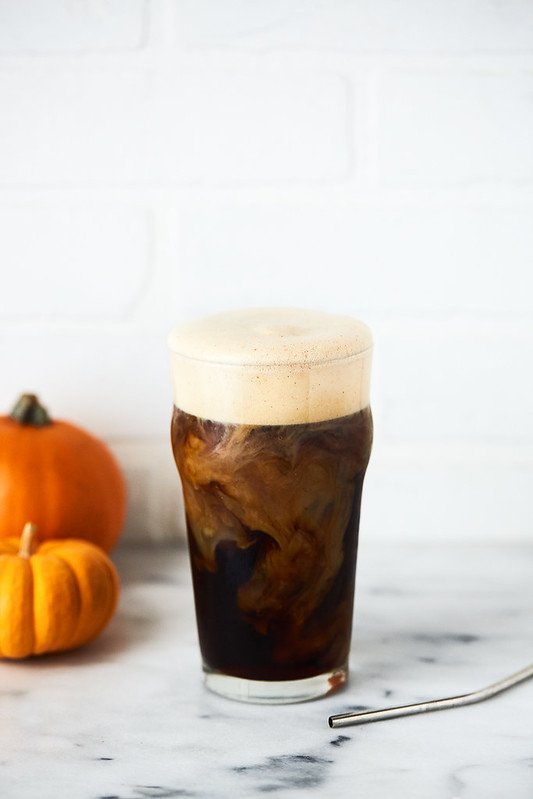 Pumpkin Puree – yes we add REAL pumpkin to this tasty pumpkin cream foam. It’s not a lot, but it brings just a lil pumpkin flavor. Just an FYI if your foam isn’t frothing to your liking, you may want to take your pumpkin puree down to 1/2 or 3/4 teaspoon

Pumpkin Pie Spice – this is where the real flavor comes from, cinnamon, nutmeg, ginger, cloves – so much fall flavor.

Vanilla Extract – the original contains vanilla syrup both in the coffee and the foam. Rather than a syrup, I like to add straight up real vanilla extract to the foam. You can also add to the coffee, as well. Vanilla bean paste or fresh vanilla beans are also really nice.

Maple Syrup or other sweetener (see above) – this is often my go-to sweetener, a little goes a long way, it’s a whole food that hasn’t been refined and stripped of it’s nutrients, it blends nicely into the pumpkin cream cold foam.

Real Salt – just a pinch is all you need, quality unrefined salt always makes sweet flavors pop. I like using Redmond’s Real Salt to get in some extra trace minerals. 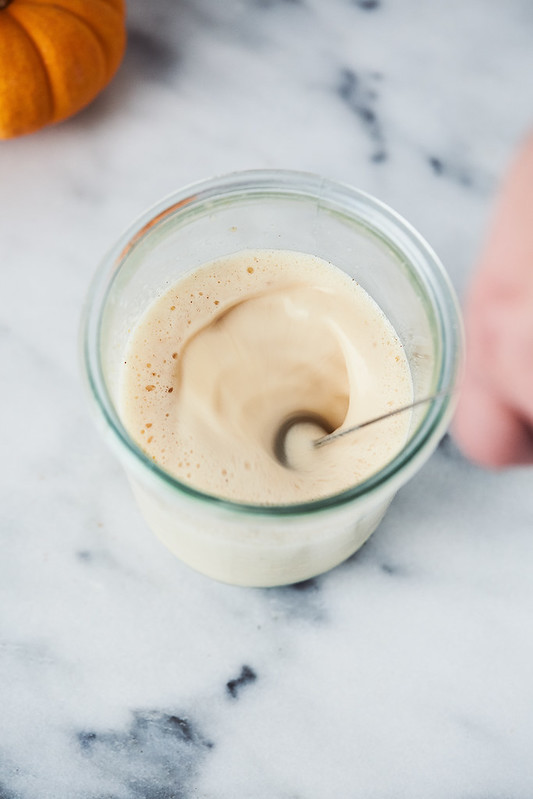 5) What You Need to Make Your Pumpkin Cream Cold Brew Foam (any of these will work):

Milk Frother: You can buy a stand alone milk frother, like the Aeroccino and most offer the option for heat froth or cold. I use this one from Nespresso and I love it, you can make cold or hot foam and also just heat milk without frothing (though it seems this model has been discontinued so this is WAYYY expensive.)

Handheld Milk Frother Wand: I see these everywhere now, they are affordable and surprisingly very, very effective. Do a quick search on Amazon, there are loads of options. I tested this recipe with a high quality Nespresso milk frother and a FREE handheld wand I was sent as a promo and the results with both were about the same!

Steam Wand on an Espresso Machine: this would work but would heat the cream.

High Speed Blender: To froth milk in a blender, pour in the ingredients then let the machine rip for 15-30 seconds, or until the milk is foamy.

Shake it Like a Polaroid Picture: add to a jar and shake, shake, shake. Won’t be the same, but hey, it’s something. 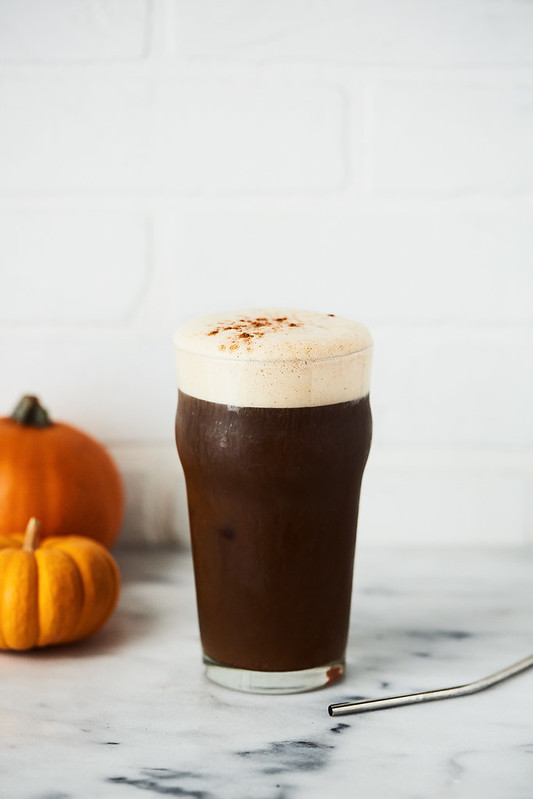