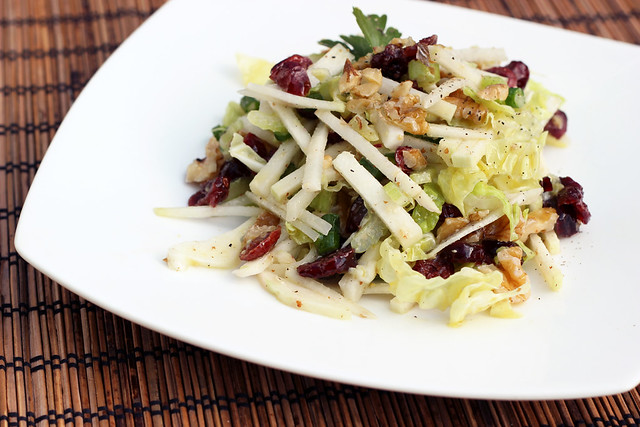 This past Saturday was the first pickup day for our CSA share from Porter Farms. Besides getting delicious, fresh, seasonal, local organic produce directly from the farm, if that isn’t exciting enough, another enticing benefit is getting foods that I have never cooked with before. There is nothing more fun than playing with an ingredient you aren’t familiar with, creating a new recipe and treating your taste buds to a brand new experience. The first week was supposedly one of the smaller weeks, since it is early in the season, but I thought the bag was loaded. We got green romaine, green leaf, Boston and red leaf lettuces plus bok choy, kohlrabi, Swiss chard and green onions. I have been eating salads like crazy, it’s Wednesday night and we still have so much stuff left. It’s exciting! 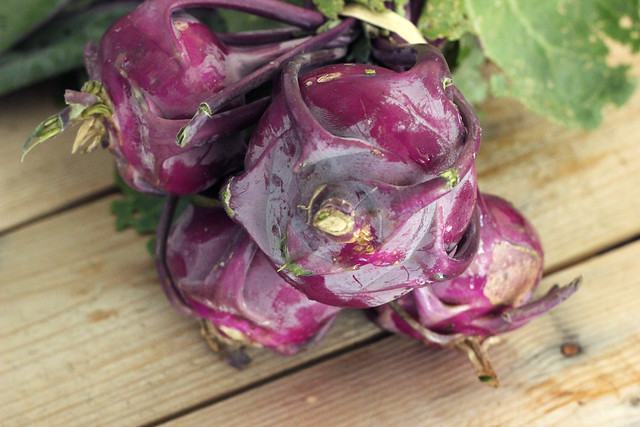 When I saw the beautiful purple kohlrabi in the first bag of veggies, I literally squealed with glee that in the first week I was already presented with a food I had never cooked with. It’s like those silly game shows on the food and cooking channels where they get a basket with a bunch of random, secret ingredients. The only difference is, besides my hubby there is no one to judge the results of my experiments. That is until today, when a good friend of ours, Jim (aka Jammer) called to stop by about a quick design job he needed Mark to help him with. We’ve been trying to make dinner happen with Jammer for a while now, so Mark told him he should stay for dinner. While the boys chatted design, I cooked away on a meal I wasn’t sure Jammer would be too into. Vegan, gluten-free Sloppy Joes with a kohlrabi slaw on the side. Yup, after really thinking about what I was going to serve him, I definitely realized he might never come back for dinner again.

I carried on, made my meal, took my photos and called the boys down. Jammer exclaimed he had a steak a few hours earlier and wasn’t terribly hungry so he would probably only eat half a sandwich and a little slaw. Before I cook look up again, his entire sloppy joe was gone and the salad had disappeared completely. Jammer couldn’t say enough good things about both and even went on to tell me and I quote ” I was afraid of that salad at first, but it was f*cking good.” So there you have it folks. (Jammer insisted that I quote him on this and that I share it with my readers.) 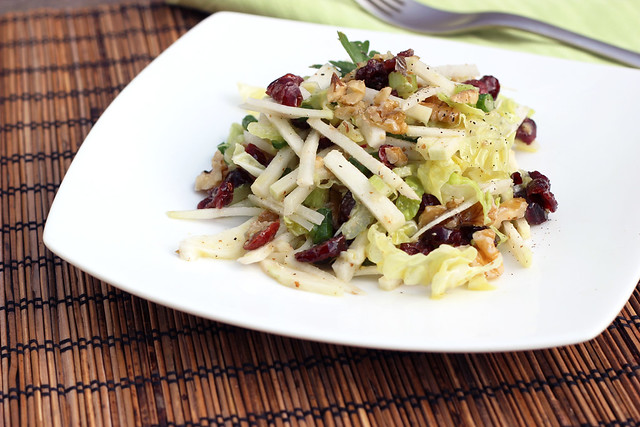 Never heard of kohlrabi? Kohlrabi is a member of the brassica family, those nutrient-dense cabbages (as well as kales, brussels sprouts, broccoli and cauliflower) whose phytochemicals are highly regarded for their antioxidant properties. Kohlrabi grows in both pale green and purple varieties. It tastes slightly milder than a broccoli stem and can be eaten raw or cooked. Think about kohlrabi as what you would get if broccoli and cabbage were to make a baby.  Additionally, if you can get your kohlrabi with the greens attached, cook them as you would turnip greens or kale. I saved mine and plan to do something with them in the next day or two.

This slaw is crisp, fresh and bright and loaded with tangy flavor from the vinaigrette. The garlic scapes that I grabbed at the Lexington Co-Op in the morning were the perfect crunchy addition. If you don’t have garlic scapes, thinly sliced scallions would be absolute wonderful, too. The sweetness from the cranberries and the nutty crunch from the walnuts finished the slaw perfectly, the perfect final harmonious ingredients to pull it all together into a sweet song for your mouth. I cannot wait to see what is in this week’s CSA share. So exciting.

Do you like cooking with new ingredients? What has been your favorite new food you have tried recently? 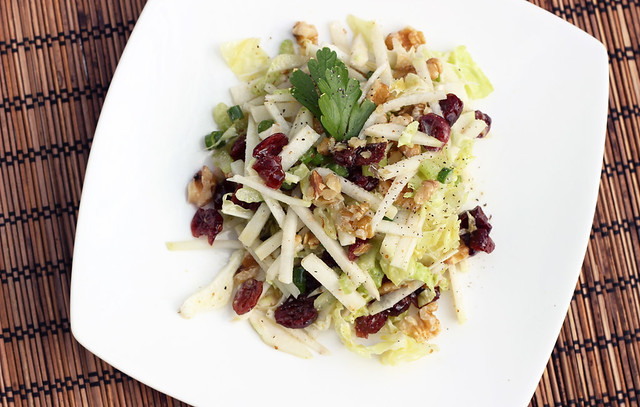 In a small bowl, mix together the vinaigrette ingredients with a whisk until well combined. Set aside.

In a large serving bowl, add all of the salad ingredients except the cranberries and walnuts. Toss gently to combine, the pour over some of the vinaigrette, you may not need it all, go conservative to start, you can always add more. Toss well to coat the entire salad with the vinaigrette. Sprinkle the cranberries and walnuts on top, salt and pepper to taste and serve.[/print_this]