Traditional southern comfort food, these Paleo Biscuits and Gravy are an updated version of a classic recipe. A simple-to-make low-carb biscuit gets loaded up with this tasty, rich, homemade dairy-free and grain-free sausage gravy. A delicious, healthier, low-carb breakfast – it’s an especially perfect option for your holiday brunch! 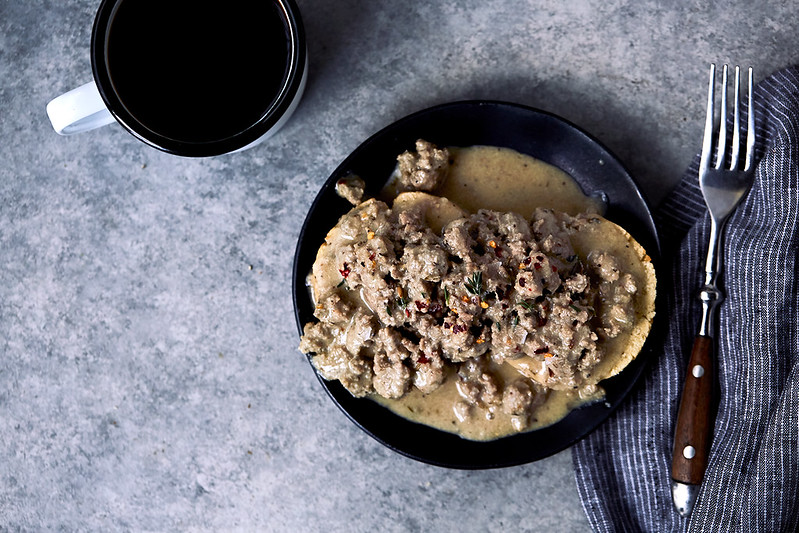 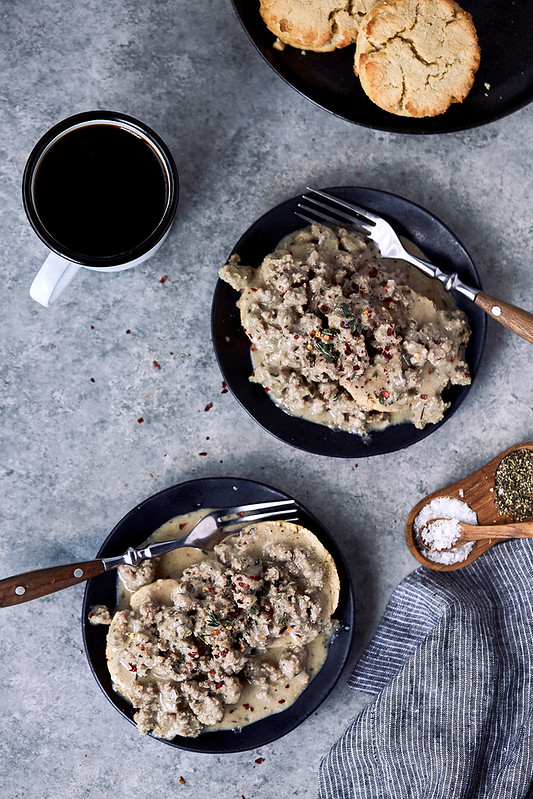 There’s something about the holidays that really amps up my wants and urges to feed people. To give them the foods that bring them comfort and the meals that incite family, tradition and love. Nourishing people is how I show love.

Cozy, thoughtfully prepared dishes made with love reminds us of where we’re from, of the people we love the most and of times where we are more content.

My husband hails from the south. Grew up in Southern Indiana and Kentucky. Me being from upstate New York, in a Greek family, our food traditions differ quite drastically. There are foods and meals that Mark grew up eating that I have grown to love and others that I will just never understand and that’s OK, same for me and my foods. But, when he first tried to explain Biscuits and Gravy to me, some nearly 15 years ago, I just wasn’t feeling it. Full honestly, it just didn’t sound the least bit appetizing. 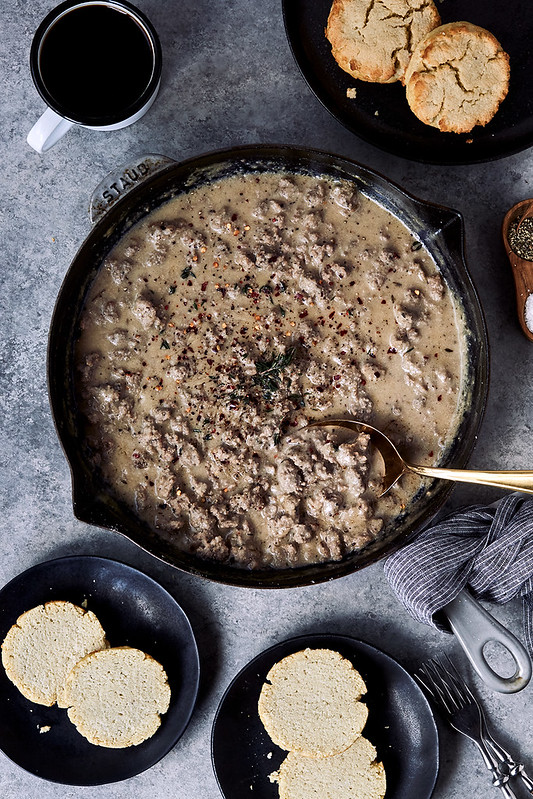 The first time I saw Biscuits and Gravy in the flesh, on a trip home to see his family in Kentucky, I was beyond turned off my the creamy, milky white gravy. It just didn’t register as food to me. I didn’t get it. I threw my hands up and said “you do you. Enjoy. I’m out!” Having a gluten intolerance Biscuits and Gravy just isn’t a dish I could eat, even if I wanted, without making it myself. It’s a cesspool of gluten and generally as it’s traditionally made, just a lot of overly processed white stuff, lots of flour, biscuits often coming from a tube, meat more often than not, sourced without thought. 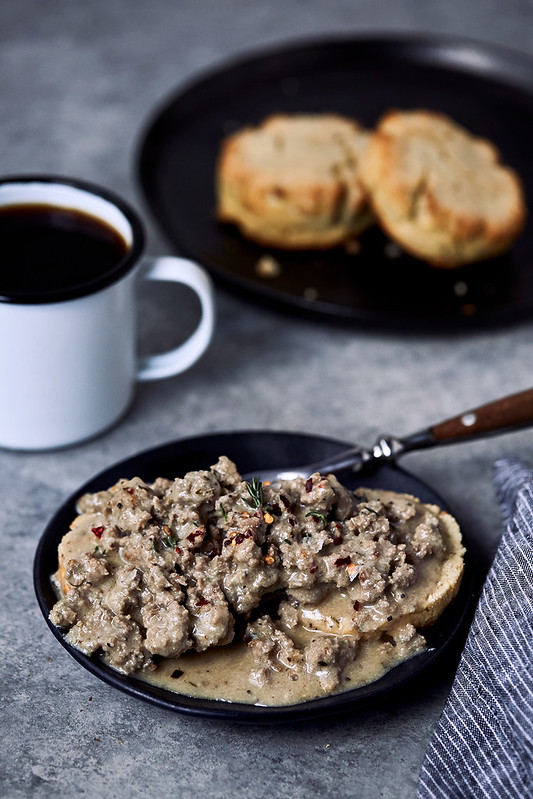 I finally had an opportunity to try Biscuits and Gravy at a gluten-free cafe in Chicago a couple years ago (I believe they served theirs over a gluten-free “popover”) – I gave it a go and it finally made sense to me. It was delicious. It was the ultimate in comfort. It was cozy, warming and it felt like being home.

I had all but forgotten about it until last year when I whipped up a batch of gluten-free biscuits and gravy for New Year’s Day Brunch for hubby and I, inspired by several other recipes. This year, after a year of eating keto (low carb, high fat), I wanted to create a version of this classic recipe that would make hubby happy and nostalgic but still work for me. And voila! Here we are. Classic Biscuits and Gravy, paleo, gluten-free and keto-friendly. 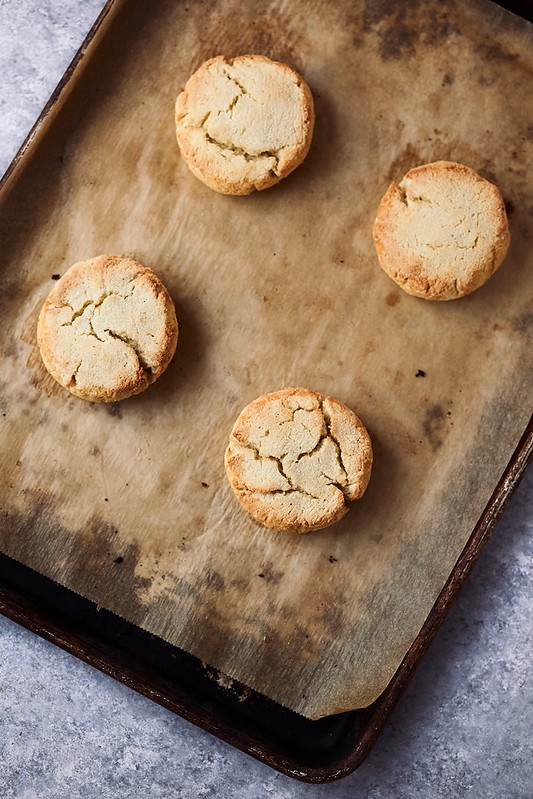 These Biscuits and Gravy are legit. The low carb biscuits get a nice golden browned outside, with an incredible traditional crumb texture, with the right amount of chew. The sausage gravy is loaded up with flavor from the various herbs and spices and homemade breakfast sausage makes for a really nice touch, especially because you can control where the meat is sourced from and be certain there won’t be any suspect ingredients added. 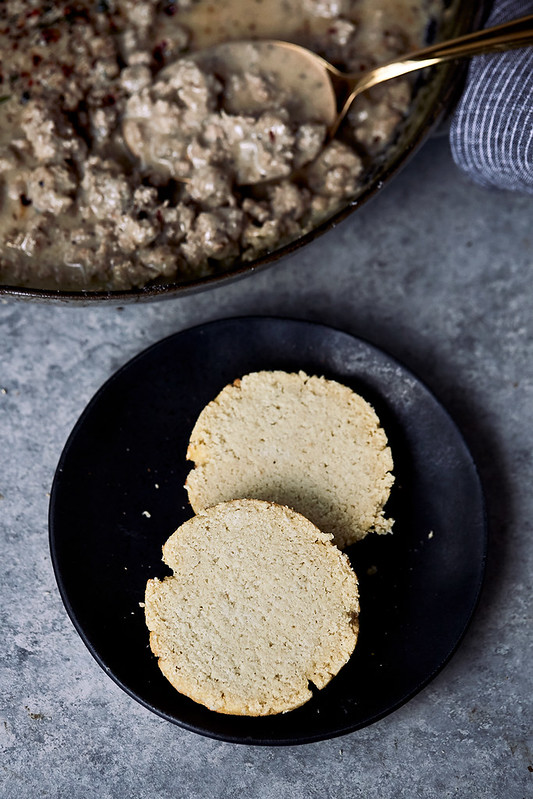 Things to note about this recipe: if you make your own homemade sausage the final result is the best ever, in my opinion, so much flavor. Plus you can select your preferred meat, so if you’d rather have chicken or turkey vs pork go for it.  I personally suggest leaving out the maple syrup if using my recipe, I don’t love that subtle hint of sweet in the gravy and consider leaving out the smoked paprika and/or cayenne as it does bring a little color to the finished gravy, resulting in a warmer-colored, nearly brownish gravy. Tastes absolutely amazing, but not the same look at traditional white sausage gravy. Even the ground sage and fennel brings a little subtle color to the gravy, I don’t mind this, especially knowing it’s from delicious seasonings vs. a stark white flour and milk loaded gravy.

For thickening the gravy, I personally like the results with the tapioca starch, it’s a small amount additional carbs per serving. If you really don’t want that, try using xanthan gum if you don’t mind gums. About 1/2 teaspoon sprinkled on, when you add the liquid. Stir well and allow to simmer, it will thicken as it cooks. 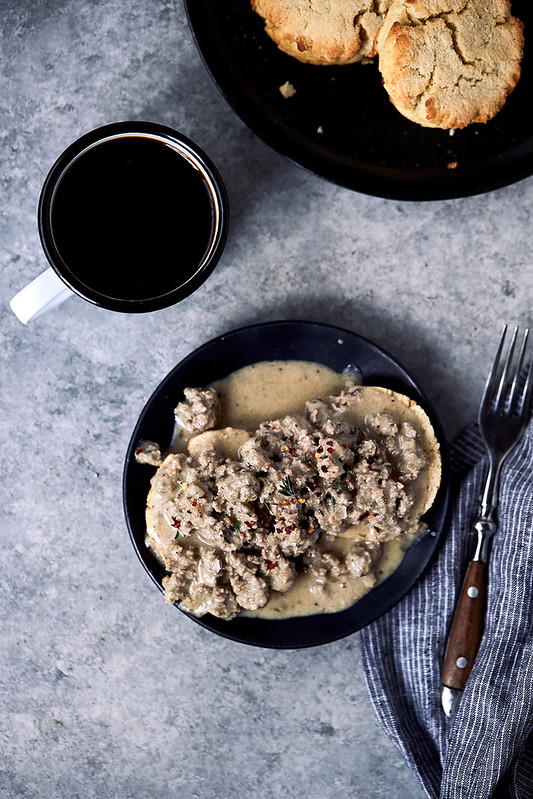 Save Print
Cook time
25 mins
Total time
25 mins
gluten-free, grain-free, paleo, egg-free, dairy-free, nut-free, whole30, keto, AIP and low FODMAP options
Serves: serves 4
Ingredients
Sausage Gravy
Instructions
Notes
If you really don't want to use the tapioca starch in the gravy for thickening, try using xanthan gum if you don't mind gums. About ½ teaspoon sprinkled on, when you add the liquid. Stir well and allow to simmer, it will thicken as it cooks.
3.5.3226 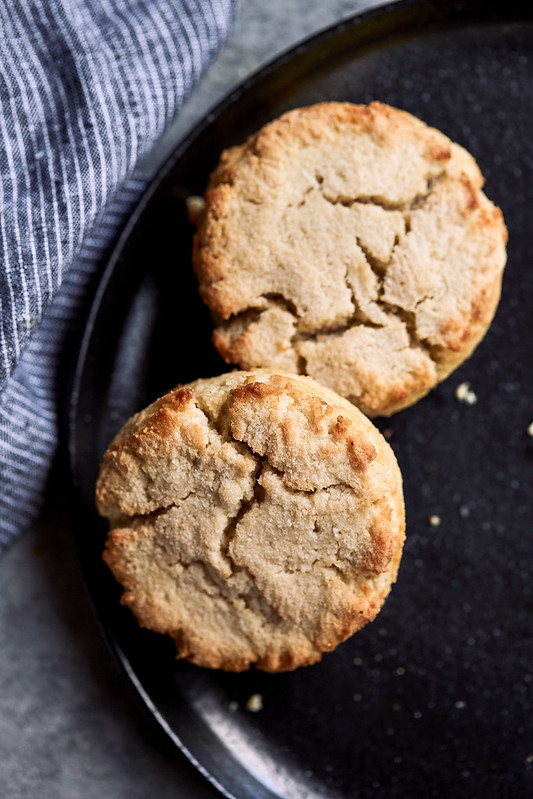