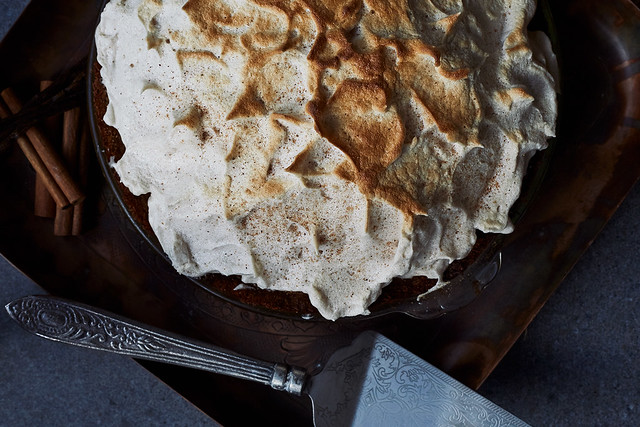 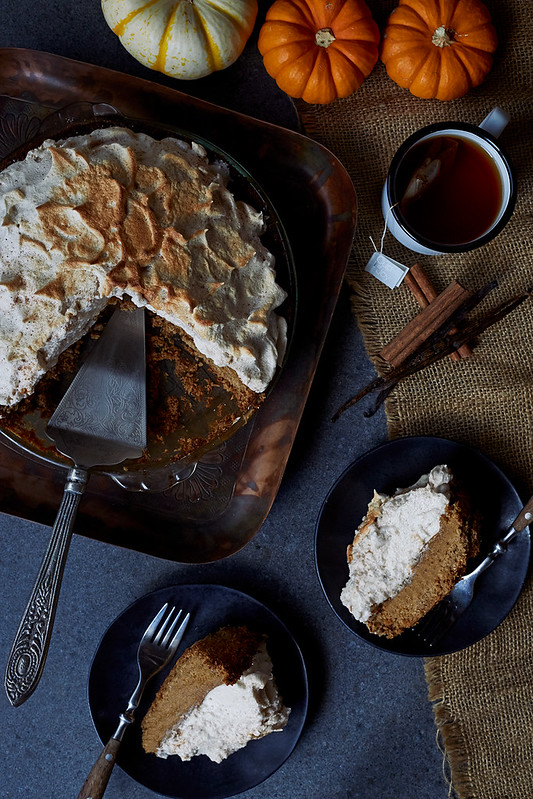 Don’t send a Thanksgiving lynching mob after me, but I generally don’t care too much about pies. I am already not a huge dessert person, but if I am going to have a little something sweet, I’d probably always opt for chocolate. Gimme this Dark Chocolate Pumpkin Tart and I’ve got everything I need. But, I am fully aware that pies are part of holiday spreads for a reason, pies go with Thanksgiving like peanut butter to jelly. I am currently also painfully aware of baking’s ability to heal and it’s important role in relieving stress, something I have personally been in great need of since the election. So here we are, with an epic pumpkin pie that will change the minds of even the greatest pie skeptics.

I have always loved the idea of a pumpkin pie, as I am a big fan of pumpkin-spiced everything, but generally I find many pumpkin pies to be just a tad lacking. First, it’s just your standard pie crust, nothing too special there, not a ton of flavor, then the pumpkin filling gets a little spicing and maybe you top it all with a little whipped cream. To me, it just always feels like it’s missing a little something. It lacks a little dessert flair. I also find that when you add adequate spices and a sweetener with some depth, beyond just standard refined white sugar, the color of a finished pumpkin pie just ends up pretty drab. Beigy brown toasted edge crust, a orangey-brown filling. I dunno, I feel like we can do better than this you guys! 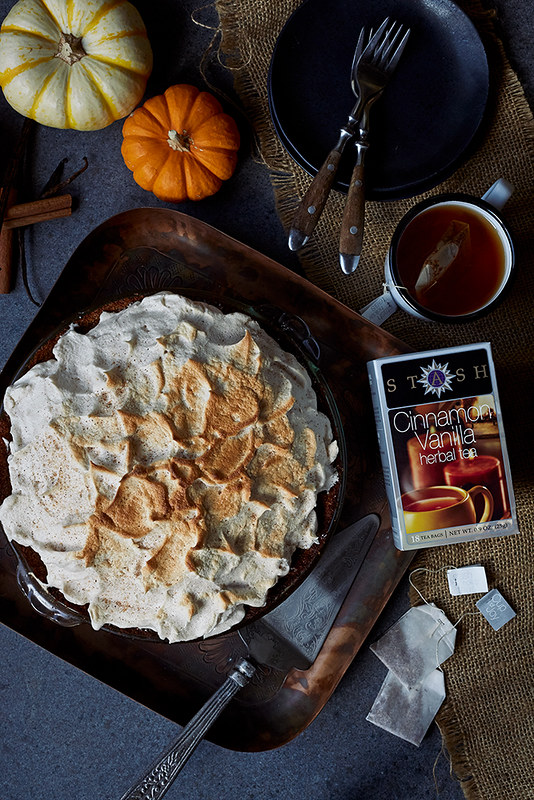 This Grain-free Pumpkin Pie with Gingersnap Macaroon Crust and Cinnamon Vanilla Meringue may be a mouthful with it’s name, but I can tell you on just one bite of this treat, you will see that the name and the various elements are all very much worth it. The crust brings flavors of crumbled gingersnap cookies combined with coconut-loaded macaroons. What a perfect marriage of two amazing cookies, am I right?

The filling then features coconut milk rather than dairy, that has been infused with Stash Tea’s Cinnamon Vanilla Herbal Tea before it blends with the rest of the standardly spiced pumpkin filling, bringing in flavors of the holidays along with subtle notes of earthiness from the rooibos herbal tea, and soothing, comforting goodness from the chamomile.  The cinnamon vanilla meringue topping not only mirrors the spicy sentiments of the rest of the pie, but it also brings a bright, creamy pop of white to an otherwise drab-colored pie. Like a puffy, cloud of goodness. 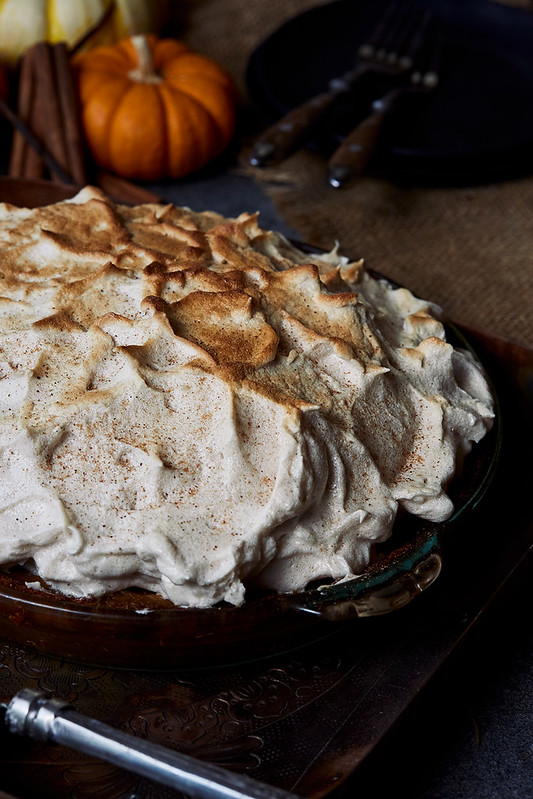 I, in fact, also love to serve this pie with an additional warm mug of Stash Tea’s Cinnamon Vanilla Herbal Tea on the side, with just a splash of homemade vanilla bean creamer because you can never have too much of a good thing. Well, maybe that’s not totally true, but we are going with it here. 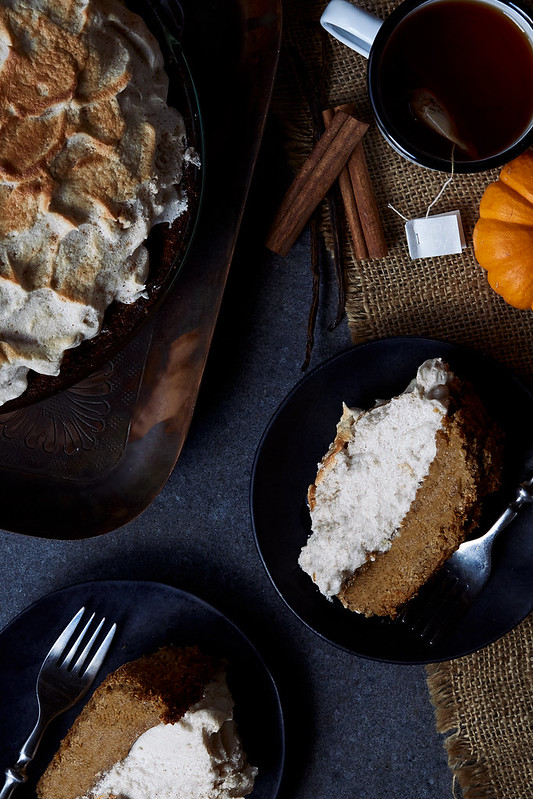 I recommend making the pie earlier in the day of (or the day before) when you plan to serve it and make the meringue just before serving for the very best and freshest results. It takes but a few minutes. Pop the meringue-topped pie under the broiler or if you have a kitchen torch, that will work beautifully, too – this last step gets those golden brown peaks and almost a little crisp on the meringue. 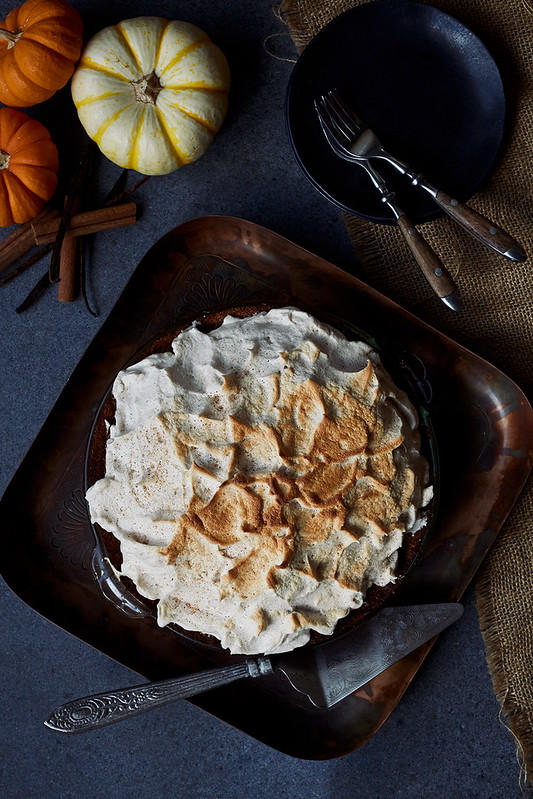 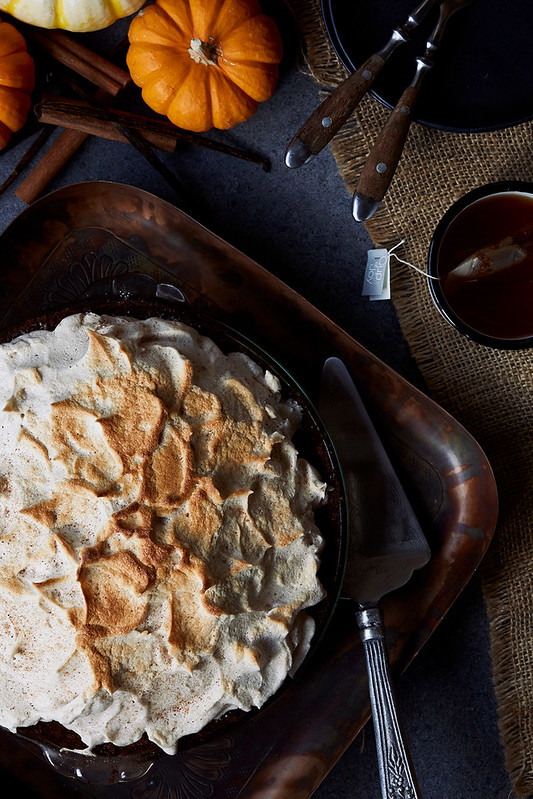 This is a sponsored conversation written by me on behalf of Stash Tea. All content, ideas and words are my own. Thanks for supporting the sponsors that allow me to create new and special content like this for Tasty Yummies.