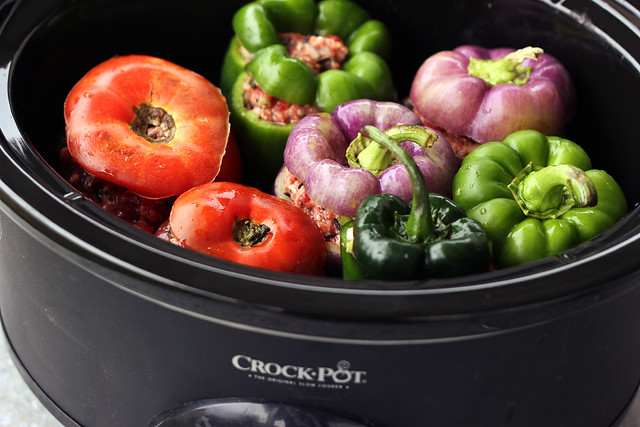 This is my version of a dish my parents have been making for as long as I can recall. They always serve it with a big Greek salad on the side as well as kalamata olives and some cut up feta cheese. So good! They bake them in the oven which I really like, but when I made these a week or two ago in the oven with black rice in the stuffing, I of course didn’t account for how long they would take to cook, I am not always the best at that type of longer term dinner planning. I didn’t get them into the oven until nearly 7:30pm, OOPS! We definitely didn’t eat dinner until 9:30pm that night, which I am not necessarily a fan of. 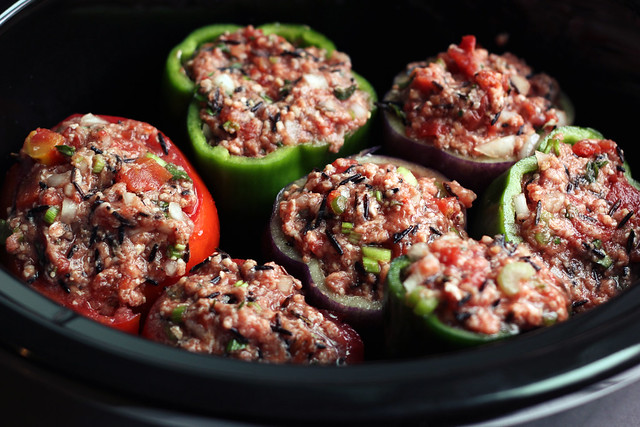 After that dinner, we got even more peppers and tomatoes the following Saturday in our CSA from Porter Farms, including more of the beautiful purple bell peppers, which are just beautiful. I thought I would try making these again since they are such a great use for the veggies, but this time in the Crock Pot, so they can just cook away all day and be hot and ready for us when we were ready for them. It turned out perfect, the peppers and tomatoes were nicely roasted and tender, but not too soft, the stuffing had a delicious taste and the wild rice had a sweet and nutty bite to it. 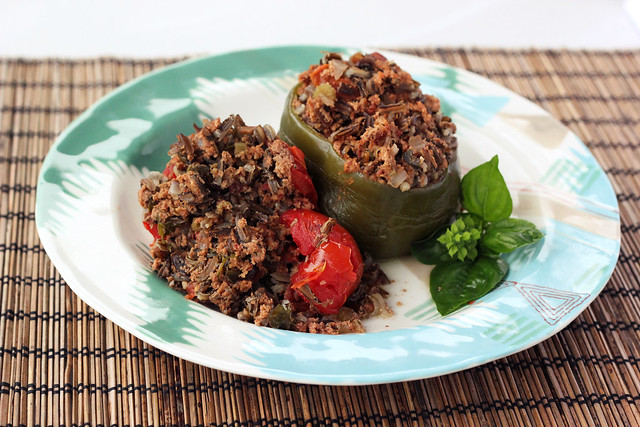 The thing I like a little bit better about making these in the oven versus the Crock Pot is if you take the foil off for a little bit, you can get a little crispiness to some of the stuffing, but other than that, the Crock Pot version is just as delicious. If you are making this in the oven and you have a bit more room, I also enjoying filling zucchini and eggplant with this stuffing.

Sadly these are so much more beautiful when they go into the Crock Pot versus when they come out, but I promise what the veggies lack in color, they make up for in taste. 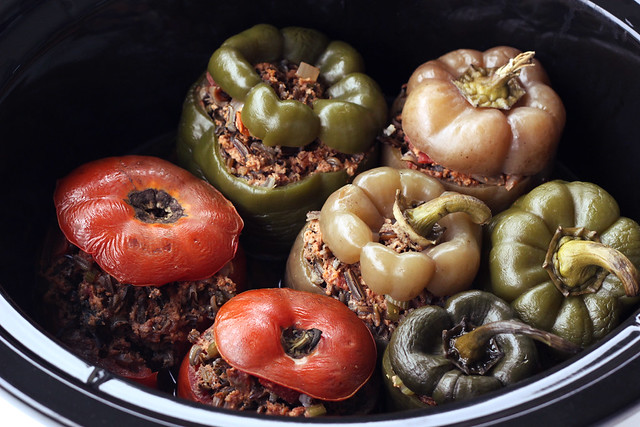 In a large bowl, mix all of the stuffing ingredients together (except for the water and the peppers). You can really get your hands in there if you wanna make sure it is well mixed.

Depending on how tightly you have them packed in there, you’ll need to be a little careful when removing the veggies from your Crock Pot, you don’t want them to bust open and ruin your pretty presentation (like my tomato decided to do). They are definitely tender, the tomatoes especially. Salt and pepper to taste, if need be when serving.

Oven Option – Preheat the oven to 400º F. Prepare the peppers and tomatoes the exact same way. Add them to a glass baking pan, with just a drizzle of water at their bases. Cover with foil and bake for approximately 2 hours until the rice is fully cooked. [/print_this]