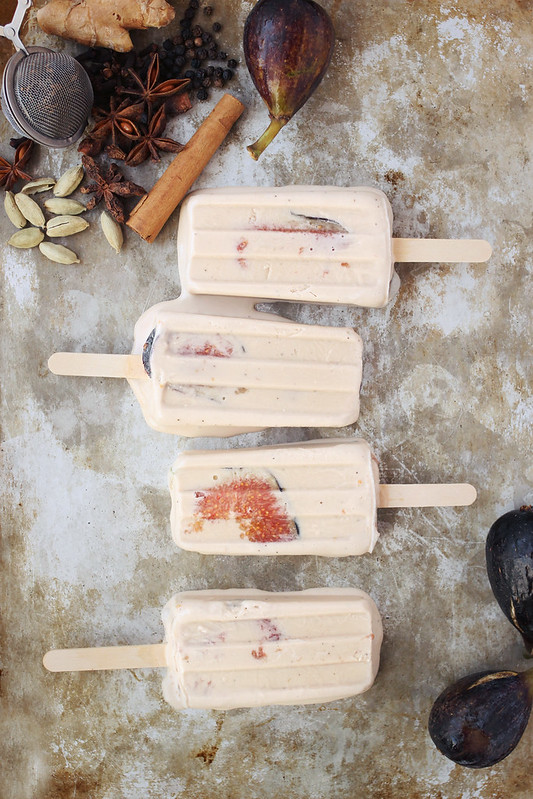 Though the end of summer is just around the corner, I would say it is hard to know that at times here in Southern California. We had some pretty hot days last week and since we don’t have any air conditioning at home and we both work out of the house, I found myself with a serious craving for some tasty, creamy homemade popsicles. And the beach.

I had been craving some of my homemade chai recently, but the idea of hot chai tea was very quickly dismissed, while I found myself sweating in the summer heat. Naturally, the next logical thought was a popsicle version of the tasty hot coconut chai lattes, that I make during the winter months. With the abundance of figs we have coming from our tree, I was dying to find a way to incorporate them into whatever popsicle I made, so the idea was born for these delicious, creamy Chai Spiced Coconut Fig Popsicles.

For lack of sounding like I am bragging, these are THE BEST homemade popsicles I have ever made. They are full of amazing chai flavor and they are so perfectly creamy and rich. The only bad part of all of this amazingness was the day I decided to photograph these, it was well over 90 degrees in our house and the popsicles were melting so fast I couldn’t keep up. I was scrambling, running, yelling and snapping. I was able to snap these two photos and before you know it I had a puddle of creamy goodness on my hands. I tried to pull the few remaining popsicles out and they had melted so quickly in the molds they were disfigured and wonky, the sticks came out of a couple, it was just a hot mess. Literally. The remaining few were more than good enough to eat, but not really pretty enough for photos. A shame really.

I thought about remaking these and photographing them again, but that would just delay me getting this amazing recipe to you, and I couldn’t bear that thought of that. These are far too delicious not to share. So, please excuse the photos, but trust me when I tell you that you need to make these ASAP. 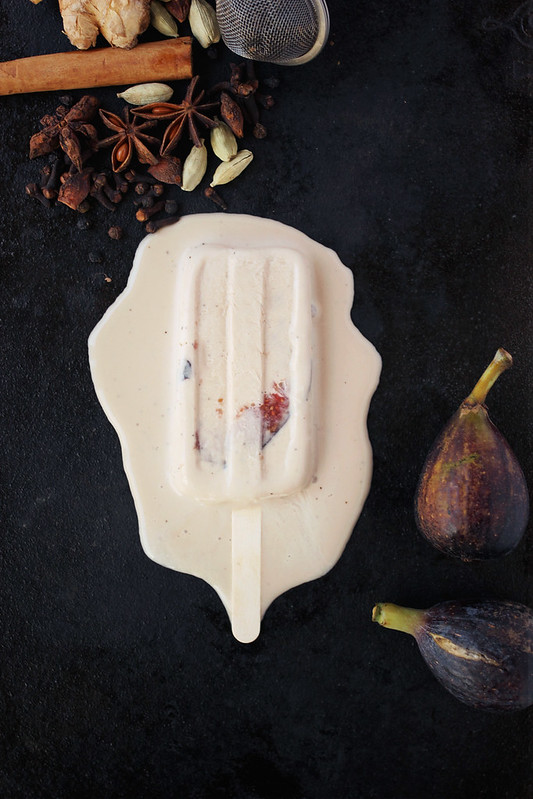 Heat the coconut milk to a boil, then add the sugar, tea bags (or loose tea), and all the spices you are using. Do not add the vanilla extract. Bring to a simmer and let it simmer for about 2 minutes. Take off of the heat, allow the tea to steep for about 4 to 5 minutes. Remove the tea bags (or the tea infuser) and allow the spices to continue to infuse for at least another 15 minutes longer, or up to 30 minutes, depending on how strong you want the chai flavor. Once the desired flavor is reached, strain out the the spices. Add the vanilla extract and additional sugar, if necessary. Mix well.

Place the mixture in the refrigerator and allow to cool completely. Place fig slices into the popsicle molds and press against the sides.  Pour the coconut chai mixture into the molds, be careful not to overfill, add the popsicle sticks and freeze for at least 2 hours.

Use whatever tea you’d like, make the flavor your own

Feel free to experiment with other sweeteners, I have found that sugar makes for the creamiest and least icy popsicles, honey or maple syrup would be great, but will yield a slightly icier popsicles

If you don’t have figs, feel free to leave them out, these are quite delicious just as

Disclosure: This post contains affiliate links. If you make a purchase using these links – your cost remains the same, but I earn a small percentage to help support this blog. Thank you!