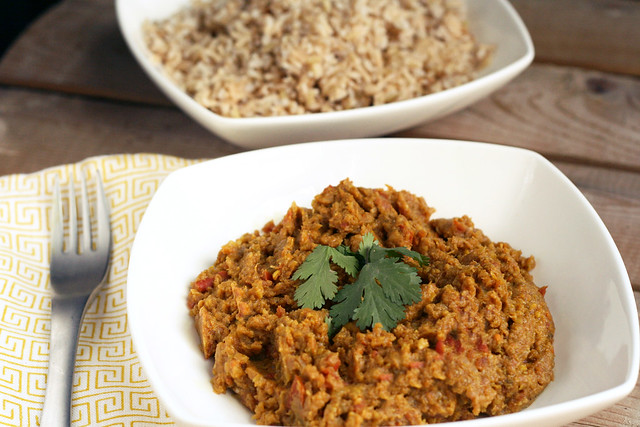 I have always loved Indian food, my husband, Mark, not so much. I have always had to either eat it without him or con him into going for my birthday, since I obviously get full say in what restaurant we go to on that night. I can get away with making different curries and such at home, but he generally didn’t get too excited about the idea of going out for Indian food. A month or so ago, I convinced Mark to give it a try again and our waiter suggested a Gufran platter for him, that had a few different Tandoori cooked meat and seafood dishes on it, this way he could try a few different things. He loved it. His favorite was a tandoori style fish in a really spicy sauce. YAY success!! After that, he kept asking me when we were gonna go again, as you can imagine this made me so very happy. So while we were in Austin for SXSW, since many of our friends are vegetarian, I suggested we go for Indian food one night. Everyone, including Mark, was down with the idea and excited to go. We ended up with a table of 17 of us! The company was amazing, the food was great, and I of course ordered my usual favorite, Baingan Bharta, while Mark ordered some Tandoori chicken and some chicken naan. All was well in the world.

This was until Mark woke up the next morning with what appeared to be food poisoning. He was the only one out of our large group that got it, but seeing as it came on very quickly, and was gone within 24 hours, that is what we assumed it to be. No one else at the table ate chicken, so it is very possible that was the culprit. But, at any rate, we are back to square one with Indian food in our household. Even though Mark says it is temporary, he needs a bit of a break until he’ll go back to it! Understandable, but still, selfishly, I am quite bummed.

So, what was I to do? I was craving Indian food since we got home. I wasn’t gonna go out for Indian food on my own and there isn’t a restaurant close by for take-out, so I decided I wanted to try to create my favorite Indian dish at home. I asked Mark if that would be OK and if the smell of it cooking would bother him, and he said he is OK with it, he just wasn’t going to eat it this time. So, while my baingan bharta cooked away, Mark made himself a frozen pizza and surprisingly he commented many times at how delicious my meal smelled. Baby steps. 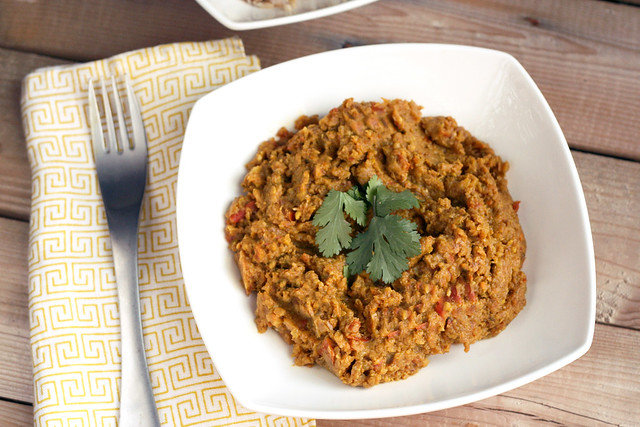 Besides all of the curries I make, I really haven’t tried cooking too much Indian food at home, since frankly it intimidated me. So, I did a little looking around at classic and authentic Indian recipes for this tasty eggplant dish and then I dove right in. I am really excited at how simple it was to make and how amazing it turned out. It honestly took more time to chop, mince and dice than anything else. The actual preparation of the dish was quite simple.

This mélange is classically a bit spicy, but if you don’t want the heat, eliminate the chiles (jalapeños) or just go with a half of a small one to start. I like spicy so I went with two large peppers. I served this over some fluffy organic brown basmati rice and made a quick creamy vegan cucumber side salad (I made a simple dressing with some grapeseed vegenaise, rice wine vinegar, garlic and a little sea salt) to ease my mouth from the heat of the dish.

The key flavor to this dish is the smoked/roasted eggplant. There are a couple different ways that you can achieve this (see the first part of the recipe), classically the eggplants are grilled over charcoal or direct fire to impart a smoky flavour to the flesh of the eggplant.

Oh and by the way, if you are like me and have been wishing and hoping to come across a good gluten-free naan recipe – fear not – the lovely Leanne from Healthful Pursuit has conquered that beast. Check out her gluten-free naan recipe here. Since she had mentioned it on Facebook earlier in the day, I was dreaming about her naan the entire time I was making this dish, but Leanne hadn’t yet posted the recipe when I made this. So, it looks like I will have to make this recipe again, with her naan on the side. Thanks Leanne. 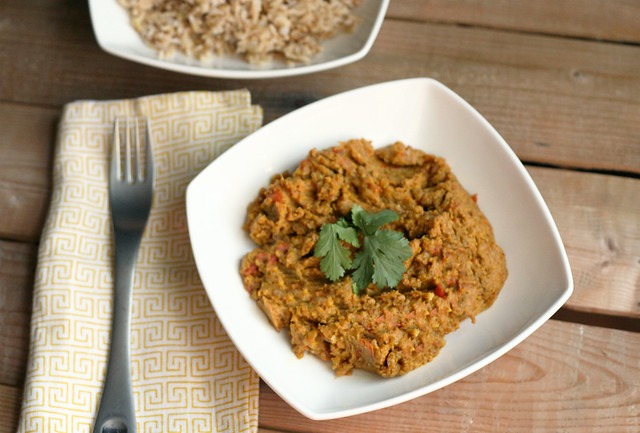 While your eggplant is roasting, start preparing your vegetables and spices. Just before the eggplant is done, heat up the remaining oil (or ghee) in a large pan over a medium-high heat, add in the cumin seeds (if using powder, add it in at the same time as the onions) and cook for a minute or two until they get toasted and fragrant and begin to dance around in the pan. Add in the onion and chiles, sauté for 5 to 8 minutes until the onions are tender and translucent. Add in the ginger, garlic and turmeric root (if you are using fresh), sauté for about 2-3 minutes. Add in the tomato and the remaining spices, turn the heat to a medium low and allow it to cook about 5 to 10 minutes or just until the eggplant is done, stirring often.

Once the eggplant is done, allow to cool a bit and peel off and discard the charred skin, scoop the flesh into a bowl and roughly mash it. Add the eggplant to the sauce and stir well to combine, allow to cook another 3-5 minutes. Add in some of the chopped fresh cilantro and stir to combine. Turn off the heat. You can serve the sauce as is or puree it, which is how it is traditionally served.

To puree the sauce, carefully spoon the mixture into your food processor and process until smooth and return to the pan or a large serving bowl. Serve over basmati rice with a sprinkle of fresh cilantro. Serve with papadum or naan on the side.  (check out Leanne from Healthful Pursuit’s gluten-free naan recipe here.)

* ghee is made from dairy, but during the clarification process, milk solids are removed, therefore all lactose and casein is removed, leaving the healthy butter fats behind. Small, trace amounts of casein and lactose can possibly remain in the ghee, but unless a person is extremely sensitive, consuming ghee will be fine, even if dairy is not. Obviously use your own judgement, and if you are making this vegan, skip out on using ghee and use whatever your cooking oil of choice is.