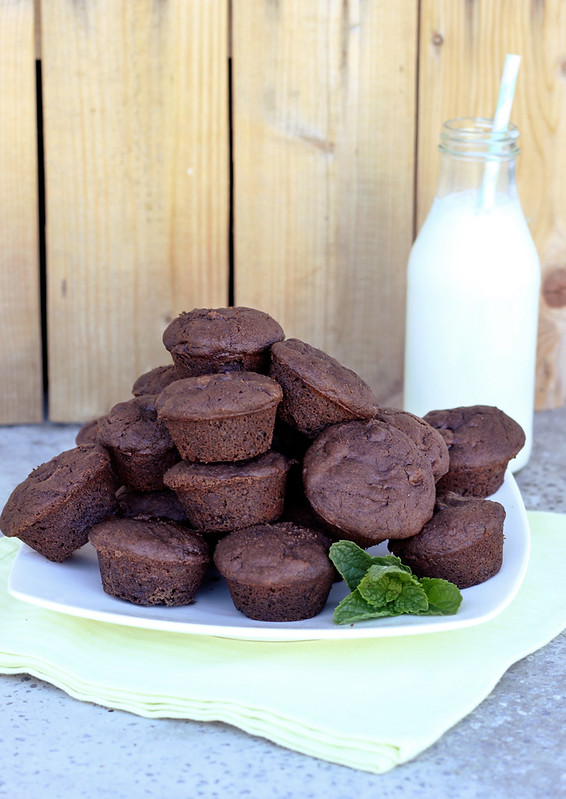 I feel a little bad, because I really haven’t addressed the running thing in about two weeks. So many of you offered really great advice and I was really feeling great about it all.  I went on a total of three runs and I really took each one very easy, trying not to go too hard too fast. Because I was using an iPhone app that basically was helping me ease into running, it had me on a program where I would walk for about 90 seconds then run for 45 and so forth, including a warm up and a cool down. The workouts were 30 minutes long and I was “running” about 2 miles each time. After my third run I was experiencing some very severe inner knee pain almost immediately afterward. I hesitate to even call it knee pain, as it was far more like leg pain, than knee pain. I wasn’t having any pain in my knee caps, I could kneel on them, etc. It was more any amount of pressure was seriously irritating both of my inner legs near the knee. Going up and down the stairs was horrid. I decided I need to take a break from running before I did any major damage to my body. Shortest running career, EVER! I kept up with my daily yoga practice and I did a ton of icing and I was taking ibuprofen, as needed. All of those things helped, but it took a solid 2 weeks for my legs and knees to stop hurting as much as they were. I wouldn’t say that now I am back to the way I was before this happened, but I am very close. So yeh, that was seriously upsetting and totally a let down. It is partially why I haven’t really mentioned it, because I was a little let down that only 3 runs in, I was already forced to take a break.

In talking with my friend Elyssa, who is also my amazing chiropractor and one of my yoga teachers, and in her looking at my knees, she explained that it seemed to be a tracking issue. My knees just aren’t tracking straight, so when I bend them, they tend to want to fall in, instead of staying in line over my toes. Not caused by the running, something that was already there, but aggravated by the running. Now that I am aware of this, I notice all of these things I do, even in yoga, where I allow my knees to fall in. So she gave me some strengthening exercises to do and I haven’t given up all hope, just yet. I do feel like I need to do some work on my body before I jump back into running. That knee pain honestly scared the crap out of me and made me quite sad that I was never going to be able to enjoy running. 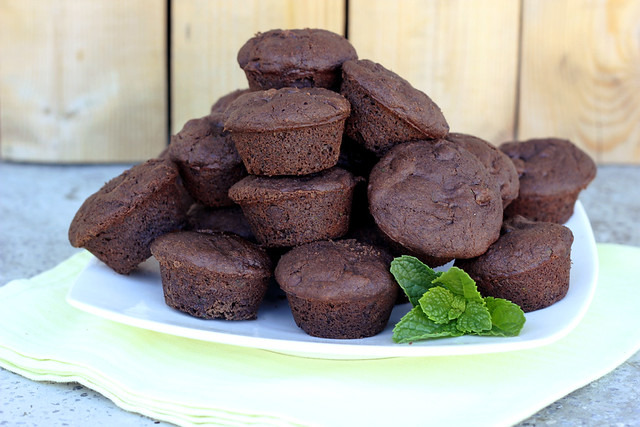 At any rate, the running stuff really has very little to do with these brownies, but I felt the need to share the status on my newfound and short love affair with running, since I had left everyone high and dry after you all offered so much incredible advice and encouragement. Thank you again, seriously and hopefully I will need more of that advice again soon, when I feel ready to go back.

I guess what these brownies do have to do with this story is that I made them over the weekend for a Sip ‘N See party for Elyssa, her husband Aaron and their brand new baby boy, Oliver! The party was a bit of baby shower, but everyone got to meet the amazing Oliver and welcome him to the world. Elyssa and Aaron adopted baby Oliver and the party was one of the nicest celebrations I have ever been to. It was a very casual and laid back get together with lots of people from our yoga studio and obviously some of their other family and friends. Everyone just got to visit, swoon over the baby and just enjoy each other’s company and lots of yummy food. Since a handful of other people there are also gluten-free, a few are vegan, some are just dairy-free or just vegan, etc – my friend Kathleeen (hi, Kathleen! 🙂 ) asked me to make something sweet for a dessert! I was all over that. I love making sweets for people, especially when I know they will appreciate them being gluten-free and vegan!

It took me a couple of days to decide what to make for a good amount of people, in a casual grab-it and go kinda setting. It had to be small, bite-sized and easy to just pick up and eat. I was thinking about cupcakes for a while, but I am not much for the decorating part of cupcakes. It just isn’t my thing. That’s when I realized a brownie bite would be perfect. When I made these for the party, I wasn’t sure everyone would love the addition of mint, so I made half of them mint and half just classic chocolate. It could have been their placement on the plate, or coincidence, but the mint ones went so quickly. They were gone long before the classic ones. Since it was the first time I had made them, for the party, I did decide that I wanted to change a couple things about the recipe, so I made them again a few days later, to try to perfect them. The second time was definitely the charm, I seemed to get the ratios more on point and they were exactly right. 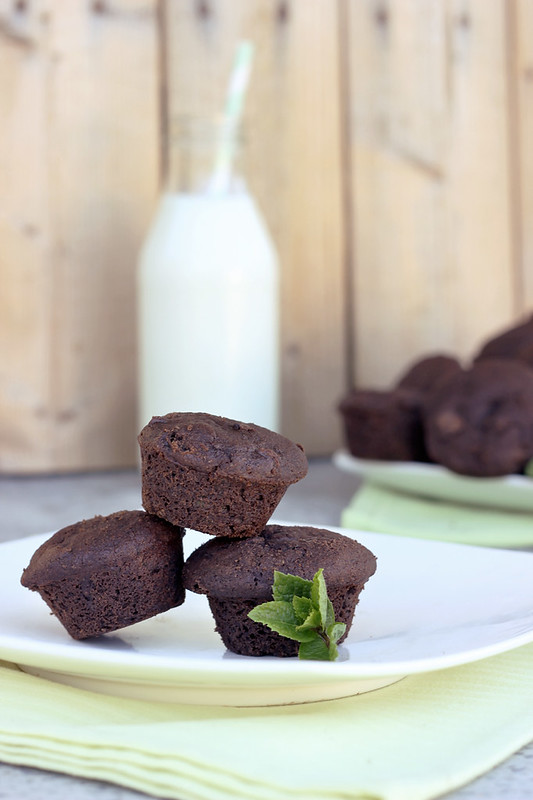 The fact that I have an overabundance of fresh mint growing in my yard, is the reason why I had to include some fresh mint in these brownie bites. I couldn’t resist. If you don’t have any on hand, no worries, you can simply leave it out. If you don’t like mint flavor, just leave out the fresh mint and the mint extract and add in a little more vanilla and you are left with classic chocolate chip brownie bites.

These tasty little nuggets are filled with flavor, they are the perfect size, they are easy to eat and the mint and chocolate combination is really to die for! They are fluffy and moist, while being chocolatey and gooey from the chocolate chips and for me, they are the right amount of sweet. 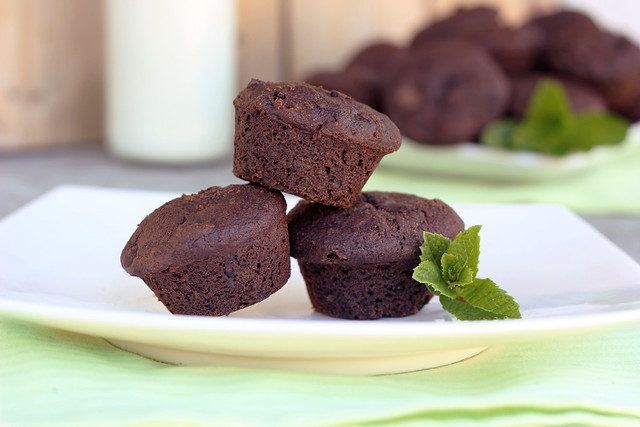 Preheat oven to 325 degrees. Brush 3 dozen mini-muffin pans with oil; set aside. You can also just use one pan and wait until each batch cools to unfold them and then regrease the pan to make the next batch (this is what I did).

Place approximately 1 tablespoon batter into each prepared muffin cup, you want them about 3/4 of the way filled. Transfer muffin pans to oven, and bake until a toothpick inserted into the center comes out clean, 18 to 22 minutes. Let cool completely in the pan on a wire rack before unmolding.